A word of reminder: Unlike the majority of the chapters in the Book of Proverbs that are clearly authored by Solomon, the opening verses of Proverbs 30 suggest a different author—“Agur the son of Jakeh” (30:1).  The proverbial ponderings in chapter 30 are a response to two men who came to Agur seeking insight and wisdom.  We continue our study of Proverbs 30 by focusing on verses 18-20.

Agur suggests four things in these proverbs that were beyond his ability to explain–the fourth of which is the application of the three prior observations. Let us briefly consider the former three before addressing the fourth.

marvelous; inexplicable] for me, yea, four which I know not [cannot understand; perceive; comprehend]: 19  The way [journey; path; manner; conduct] of an eagle [or other large bird of prey] in the air [sky]; the way of a serpent upon a rock [boulder; cliff]; the way of a ship in the midst of the sea; and the way of a man [i.e. mighty man or warrior] with a maid [damsel; virgin].”

“The way [path] of an eagle” in flight is outside of man’s ability to describe or plot. Its sharp eyes dart hither and yon in search of prey…it soars, dives and rides majestically upon wind currents and no man is able to track its path or destination.

A second consideration is “the way [path; journey] of a serpent upon a rock”—unlike sand, the snake slithers and slides on rocks and boulders leaving behind no trace of its presence or path.

A third illustration is “the way [journey; path] of a ship in the midst of the sea” [in ancient times before there was a GPS].  Ancient mariners learned to plot their journey across the oceans by observing the stars; however, their path was at the mercy of the wind in their sails.  Like the eagle and the serpent, a ship at sea leaves no trace or evidence of its passing upon the great waters of the ocean.

Having given three examples of objects whose journeys are unplotted and whose paths are untraceable, Agur turns his focus to two human applications of a strong man with a young virgin and an adulterous wife with no morals (30:19d-20).

Proverbs 30:19d-20 – “19d… and the way of a man [i.e. mighty man or warrior] with a maid [damsel; virgin] 20 Such is the way of an adulterous woman [woman who is the wife of another]; she eateth [devours; consumes], and wipeth [destroy; wipeout] her mouth [word; speech], and saith [speaks; challenges; declares], I have done [committed; practiced; performed] no wickedness [sin; evil; trouble].”

The tragic reality observed by Agur in these human applications scar many families and are all too real for too many Christian homes.

Some reading today’s devotion have watched “the way of a [strong, imposing] 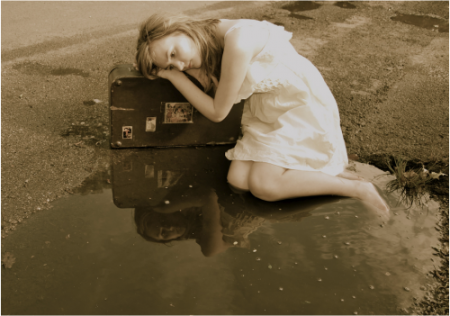 man with a maid” (30:19d) and suffered the sorrow of a rebellious daughter whose affections for an ungodly, foolish man led her down a path of self-destruction.  Too many young women have grown up in loving, Christian homes and compromised their moral character with a boastful, cavalier fool who professed love while driven by lust.  Sadly, the tragic consequences of a daughter’s naivety and rebellion are often borne by the daughter and her parents to their graves.

The second application of the indescribable path and journey of humanity is “the way of an adulterous woman” (30:20). The subject of Agur’s final

consideration is the subtlety of a married woman who sets her affections on men other than her husband. Who can understand a wife and mother who sacrifices her moral virtue, disdains her wedding vows and rejects her maternal responsibilities for another man? Who can explain the path of wicked thoughts and passions that lead a woman to disavow her God, husband and children and defend her actions saying she has committed “no wickedness”?

I close with Christ’s teachings on the subject of marriage and adultery:

Matthew 5:27-28, 32 – “Ye have heard that it was said by them of old time, Thou shalt not commit adultery: 28  But I say unto you, That whosoever looketh on a woman to lust after her hath committed adultery with her already in his heart…32  But I say unto you, That whosoever shall put away his wife, saving for the cause of fornication, causeth her to commit adultery: and whosoever shall marry her that is divorced committeth adultery.”