Proverbs 28:21 – “To have respect [acknowledge; know; distinguish; recognize] of persons [face] is not good [best; pleasing; not a good thing]: for for a piece [morsel] of bread [i.e. food; meat] that man will transgress [rebel; revolt; offend].”

The universal symbol of justice is a statue we Americans know affectionately as “Lady Justice”.  Wearing a blindfold to impart “blind justice” untainted and undeterred by prejudice, she bears in her left hand the scales of justice and in her right the sword of judgment.

Sadly, the exercise of justice in our society is neither blind nor just.  The scales of justice are too often tipped in favor of the criminal and their innocent victims failed by a system compromised by liberals buying the favor of a generation contentedly “oinking” at the trough of social welfare programs. 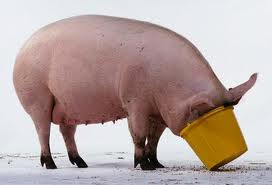 Fearing no retribution for their actions, they often riot [“transgress”] in the streets, destroying what they lack both the character and the initiative to build.