“WE hold these Truths to be self-evident, that all Men are created equal, that they are endowed by their Creator with certain unalienable Rights, that among these are Life, Liberty, and the Pursuit of Happiness…” – The Declaration of Independence

The founding fathers of our nation boldly and unapologetically stated in the preamble of our Declaration of Independence that the bedrock of our freedoms and laws is the conviction that man is the unique creation of the God of all Creation.

There is much debate today about American exceptionalism; however, few of the liberal intellectuals, politicians and justices of our day are willing to acknowledge that the fundamental difference in this nation and the nations of the world is that the United States was founded predominately by men and women who identified with “Protestant Christianity”. 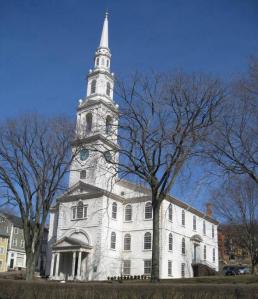 Feel free to do your own research on this matter, but you may be shocked to learn that 98 percent of Americans in 1776 identified with Protestant Christianity. In fact, 52 of the 55 delegates to the Constitutional Convention considered themselves to be Christian.  Hollywood, liberal media and public educators boldly paint the flaws and failures of men of this era and indeed, they were not perfect; however, the inescapable reality is that America’s failings run parallel with this nation’s departure from the fundamentals of the Christian faith.

I believe men and women, who govern us, regardless of their profession, have scuttled the fundamental principles that made America great.  Politicians, black-robed justices, liberal educators and media have worked in concert to pull our nation from its spiritual moorings and the future of our youth and nation is predictably that of a shipwreck without a spiritual awakening.

The question Hillsdale will ponder this Sunday morning is: “Has America Lost Her Way?”