Psalm 34:1-6 – “I will bless the LORD at all times: his praise shall continually be in my mouth.
2  My soul shall make her boast in the LORD: the humble shall hear thereof, and be glad.
3  O magnify the LORD with me, and let us exalt his name together.
4  I sought the LORD, and he heard me, and delivered me from all my fears.
5  They looked unto him, and were lightened: and their faces were not ashamed.
6  This poor man cried, and the LORD heard him, and saved him out of all his troubles.”

An ancient Jewish scribe identified Psalm 34 with David’s deliverance from Achish, the Philistine king of Gath after he fled from Saul and sought refuge in the land of the Philistines.  When the Philistines, the perpetual enemies of Israel, discovered the famed warrior general of Israel was among them, David feigned insanity to avoid being put to death by Achish (1 Samuel 21:10-22:1).

Rather than fruitless conjecturing regarding whether or not David should have fled to Gath or if his pretense at insanity is indicative of his lack of faith, I invite you to meditate with me on David’s model of praise and worship following his escape from his enemies.

Psalm 34:1-3 – “I will bless [salute; praise] the LORD at all times [always; season; continually]: his praise [glory; song of praise] shall continually [daily; always; ever] be in my mouth [word; speech].2  My soul [life; mind; heart] shall make her boast [praise; glory; boast] in the LORD: the humble [meek; lowly; needy; afflicted] shall hear [hearken; obey; listen; publish] thereof, and be glad [rejoice; cheer; be merry].3  O magnify [boast; i.e. speak with pride; ] the LORD with me, and let us exalt [raise; become proud; bold] his name [renown; reputation] together [united].

2) “My soul [life; mind; heart] shall make her boast [praise; glory; boast] in the LORD” (34:2).  The king promised boasting and praising the LORD would dominate his soul and life.  Conscious of his role as God’s anointed and the leader of God’s chosen people, David set his heart to encourage the “humble”, the lowly and discouraged souls in his realm by boldly declaring the LORD.

3) “O magnify [boast; i.e. speak with pride] the LORD with me” (34:3) is David’s invitation for the congregation to join him in praising and boasting of the LORD.

4) The fourth verb of praise and worship is David’s charge for the people to “let us exalt [raise; become proud; bold] his name [renown; reputation] together [united]” (34:3b). The congregation was to worship the LORD with a united voice and spirit and the focus of their pride was in the very name of the LORD and His attributes!

Psalm 34:4-5 – “I sought [seek; enquire; consult] the LORD, and he heard [answered; responded; replied] me, and delivered [pluck up; preserve; rescue] me from all my fears [fright]. 5  They looked [beheld; considered; regarded] unto him, and were lightened [cheerful; sparkled]: and their faces [countenance] were not ashamed [shamed; confounded; disgraced].”

David continues his public praise of the LORD by assuring the people the God of heaven hears and answers prayer.  David testifies he was afraid, but God delivered him from his fears (34:4).  Those who were with David in the hour God  saved him from his enemy turned to the LORD and were encouraged and emboldened in their faith.

Psalm 34:6 – “This poor man [lowly; afflicted; depressed; humble] cried [cried out; called], and the LORD heard [hearkened; listened] him, and saved [delivered; help; preserved] him out of all his troubles [distress; affliction; adversity].”

Psalm 34:6 marks David’s return to his own testimony as he had, in his desperation, called out to the LORD who heard his prayer  and rescued him from his troubles and distresses.

Some reading this brief devotion are caught up in the midst of trials, troubles and physical afflictions.  I invite you to join God’s people in David’s day and be encouraged by his testimony—the LORD still hears and answers the prayers of His people.

Finally, Psalm 34:1-6 reminds us that congregational worship that includes public 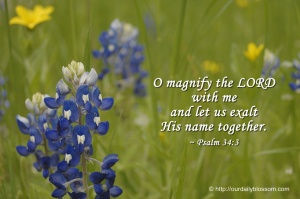 testimonies and boasting in the LORD is not only an obligation, but also an opportunity to encourage the discouraged and afflicted.