My Memorial Day blog posed three questions in reflection on the sacrifices made by those who gave their lives to secure the freedoms we enjoy as Americans:

How can we, the living, repay the debt we owe for the liberties we have inherited?

How can we express our gratitude to those who died defending the sovereignty of our nation?

What can we give in memory of those who gave their all that we might be free?

I suggested three mandates as a response to our indebtedness to those who died serving our nation:

1) We must embrace and exercise our freedoms guaranteed under the Constitution of the United States.

2) We must be willing to sacrifice our time, talents, and strength to stand and defend our liberties!

3) We must recognize the greatest threat to our nation and freedoms is not Islamic terrorists, but our own government.

We are in an ideological war with our leaders, government, media, and much of society.

We are in the midst of a spiritual war between Good and Evil; a struggle to define right vs. wrong and moral vs. immoral.  The Supreme Court, President Obama and his administration, the U.S. Senate, the U. S. House of Representatives, and federal agencies have all demonstrated a willingness to threaten, intimidate, and crush those who resist their efforts to promote a morality that opposes traditional marriage, family, and home.  The battle lines are drawn, but we face a foe that is more than flesh and blood.

In his letter to believers in Ephesus, Paul writes, “For we wrestle not against flesh and blood, but against principalities, against powers, against the rulers of the darkness of this world, against spiritual wickedness in high places” (Ephesians 6:12).  Satan, his demons, and their human instruments are assailing marriage, families, and our homes and, if the wicked have their way, the church and Bible believers will soon be silenced.

How did America get here?

For over two centuries, biblical morality held a dominant influence in American society.  From her founding by the Pilgrims (many who came to America seeking religious freedom), through the Great Revivals of the 17th and 18th centuries (referred to as The Great Awakenings, the first in 1734-1743 and the second in 1800-1840), the United States enjoyed a reprieve from the dominance of moral depravity and wickedness that has troubled humanity since the fall.  The Supreme Court’s recent decision to legalize “same-sex” marriage (June 2015) and the president’s advocation for Transgenders to use the restrooms and showers of the opposite sex in public schools (May 2016), removes all doubt America’s reprieve from the destructive consequences of moral depravity has ended.

Beginning in the late 19th century, several mitigating factors eroded Biblical Christianity’s spiritual and moral influence in America.  The introduction of Charles Darwin’s “Theory of Evolution” in 1859 and the rise of liberal theology that not only accommodated evolution, but also denied the historical and fundamental doctrines of the scriptures, overtook America’s Bible colleges, seminaries and eventually her denominational churches.

Christian fundamentalists, recognizing the devastating influence of liberal theology and its accommodation of evolution, began calling Christians and churches to return to the Bible for their sole-authority in faith and practice.   20th century Fundamentalist preachers like Dwight L. Moody, R. A. Torrey, Billy Sunday, Harry Ironside, Bob Jones, Sr., and Oliver Greene, not only called the churches to revival, but also founded Bible colleges and seminaries to battle the inroads of modernism.   A new generation of Christians, dedicated to the fundamental doctrines of the Scriptures as their sole basis of faith and practice, graduated from Bible colleges and started churches, schools, mission boards, colleges and seminaries. 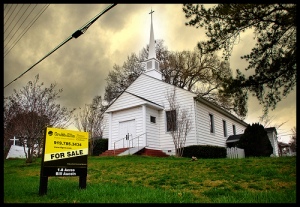 Sadly, many of the fundamental churches, Bible colleges, universities, and seminaries that had once been robust defenders of the Christian faith and bastions of spiritual separation, are today grappling with seeds of compromise and carnality that has divided Christian families and left fundamental churches and institutions weak and spiritually anemic.  At an hour America needs churches and Bible believers dedicated to the fundamentals of the faith, distinctively Christian and separated from worldliness, we find ourselves in the throes of compromise, weakened by a malice that labels the old fundamentalists “Legalists” and pursues “Christian Liberties” masking a carnality that has given rise to a piety for the Gospel, but lacks the trademark of Biblical Christianity–sanctification.

1 Peter 1:13-16 – “Wherefore gird up the loins of your mind, be sober, and hope to the end for the grace that is to be brought unto you at the revelation of Jesus Christ;
14  As obedient children, not fashioning yourselves according to the former lusts in your ignorance:
15  But as he which hath called you is holy, so be ye holy in all manner of conversation;
16  Because it is written, Be ye holy; for I am holy.”

I will continue my analysis of our nation and the failure of America’s churches in my next post.