Recent national and international events have stoked the fires of animosity for Israel as a nation and the Jews as a people. A recent vote of the United Nations Security Council condemned Israel for settlements on lands deemed by the UN as illegally occupied territories, lands captured by Israel when Syria, Lebanon, and Jordan attacked her in 1967 during a conflict known as the “Six Day War”.   Although the United States had the power to veto the resolution condemning Israel, the Obama administration abstained from the vote and in effect gave tacit support of the condemnation. 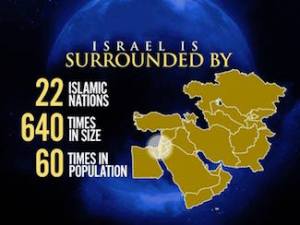 The intrigue of the debate is fascinating and tragic when one realizes that historically there is not and has never been a nation of Palestine or a Palestinian people.  The Muslim population in today’s Israel is for the most part Syrian and Lebanese.  The irony is some claiming a land of Palestine deny the historical claim of the Jews who occupied the land as their own for millenniums.

In today’s devotional (Joshua 1-5), God set the boundaries of the land of Israel for the Hebrew people. We read:

Joshua 1:1-4 – 1  Now after the death of Moses the servant of the LORD it came to pass, that the LORD spake unto Joshua the son of Nun, Moses’ minister, saying,
2  Moses my servant is dead; now therefore arise, go over this Jordan, thou, and all this people, unto the land which I do give to them, even to the children of Israel.
3  Every place that the sole of your foot shall tread upon, that have I given unto you, as I said unto Moses.
4  From the wilderness and this Lebanon even unto the great river, the river Euphrates, all the land of the Hittites, and unto the great sea toward the going down of the sun, shall be your coast [boundaries]. 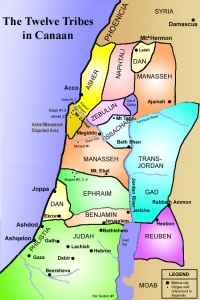 God defined Israel’s boundaries as the mass of land between Lebanon in the north and the “wilderness” or desert of Arabia in the south; from the river of Euphrates in the east to the Mediterranean Sea in the west.  Defined as the “land of the Hittites”, an ancient people known elsewhere as the Canaanites, Israel was to drive the Hittites out of the land, a people who would eventually be assimilated into the tribes of Arabia.

While all the ancient tribes and nations are a footnote in history, a testimony of God’s person and sovereignty over the nations of the earth is the existence of an ancient, distinct people we know today as Jews.  Israel’s existence and prosperity, however, was dependent upon the people obeying God’s Law.

Joshua 1:8 – 8  This book of the law shall not depart out of thy mouth; but thou shalt meditate therein day and night, that thou mayest observe to do according to all that is written therein: for then thou shalt make thy way prosperous, and then thou shalt have good success.

Sadly, the testimony of history is that the nation of Israel failed to keep God’s Law.  Israel’s existence in the 21st century is a testimony of God’s longsuffering and, in spite of Israel’s rebellion, His promise to keep His covenant with Abraham (Genesis 12:7; 17:1-8).