Jesus had been teaching parables throughout the day with crowds so large He launched out from the lakeshore where he sat in a boat while He taught.  Exhausted from teaching, Jesus asked His disciples to cross the lake to the other shore (7 miles away), lying down in the boat, He slept. 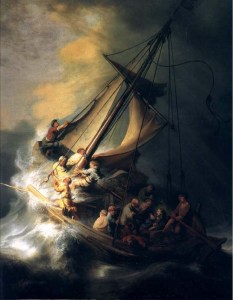 We read of this occasion in the Gospel of Matthew: “there arose a great tempest in the sea, insomuch that the ship was covered with the waves: but He was asleep” (Matthew 8:24).

At least four of the disciples were experienced fishermen; however, even those veteran sailors were unable to salvage the desperate situation they were in.   With cold winds whipping at the sailors and waves crashing into the ship, the disciples exhausted themselves trying to keep the vessel afloat. Finally they cried out, “Master, carest thou not that we perish?” (Mark 4:38).

Allow me to close with some observations and what I hope will be some practical lessons.  The first, storms in life challenge our faith and acceptance of God’s will.  Before the disciples launched the boat out into the sea, Jesus knew the weakness of His disciples’ faith and their failure to put their trust Him.

A second lesson, your response to personal storms and trials evidences your faith or lack of faith in God and His plan for your life.  The disciples’ response to the storm revealed they did not fully know Who Jesus was!   After He commanded the wind and the waves to cease, we read: “they feared exceedingly, and said one to another, What manner of man is this, that even the wind and the sea obey Him?” (Mark 4:41).  Jesus used the storm as an opportunity to reveal Who He was and His disciples were struck with fear, awe, and respect.

Someone reading this devotion is in the midst of a storm and feeling overwhelmed by pressing trials.   I encourage you to rest in this truth:

Psalm 89:8-9 – “O Lord God of host….Thou rulest the raging of the sea: when the waves thereof arise, thou stillest them.”