Some of the Bible characters in today’s reading in 1 Samuel are not only engaging, but also rich in color and character.  It is impossible for me to adequately cover the spiritual principles and applications found in each chapter; alas, I must focus my attention on but one chapter, 1 Samuel 24.

Revenge, it is said, is “Life’s most subtle temptation.”  Revenge and envy, like conjoined twins, has been the haunt of man since Cain rose up and slew his brother Abel (Genesis 4).  Revenge overtakes us when we nurse an injury we feel was unjust, allowing that injury to fester into a wound of bitterness and, when our enemy is unsuspecting, raises its ugly head in a venomous bite crushing dreams, ruining friendships, and destroying lives, marriages and families.  We would be wise to heed Paul’s admonition to believers in Rome: 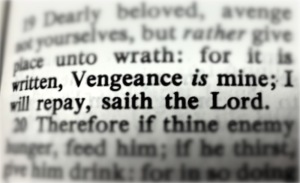 Romans 12:19 – “Dearly beloved, avenge not yourselves, but rather give place unto wrath: for it is written, Vengeance is mine; I will repay, saith the Lord.”

In today’s reading, David is a man on the run! From national hero and celebrated warrior to a fugitive hiding in desert caves, David finds himself continually stalked by king Saul who has vowed to kill him.  What began as envy, festered into bitterness provoking the king to attempt to spear David on three occasions.  Realizing Saul would not rest until he is dead, David fled into the wilderness where he would spend the next ten years living in exile. 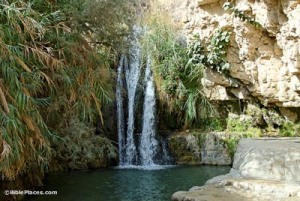 We find David and his band of 600 men seeking shelter in an oasis named Engedi, a beautiful retreat in the midst of limestone mountains with hundred of caves carved out of the hillsides by periodic rainfalls.  Located in southern Israel and overlooking the western shore of the Dead Sea, Engedi made a perfect hiding place for David (1 Samuel 23:29) until Saul learned he and his men were hiding in its rocky crags (24:1).  Choosing 3,000 men, Saul set out to find and destroy David and his men once and for all (1 Samuel 24:1-22).

With Saul and his army encamped in the valley, David and his men retreated into the darkness of a large cave overlooking Saul’s encampment.  Lacking a delicate way to address the setting, suffice it to say Saul turned David’s cave hideout into a “Royal Porta Potty” to relieve himself (24:3).  With his guards standing outside the cave, Saul was unaware he had retreated into his enemy’s lair and had an audience of hundreds hiding in the darkness of the cave. 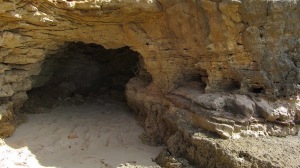 David’s men urged him to strike a mortal blow to his enemy (24:4), but his refusal stunned them (24:7).  Indeed, David’s heart was so tender that the mere act of cutting off a section of Saul’s robe troubled him (24:5).

Why? Why was David troubled for having cut a strip of cloth off the king’s robe?  In spite of Saul’s flaws and abuses, David heart was tender toward the king.

1 Samuel 24:6 – “And he said unto his men, The LORD forbid that I should do this thing unto my master, the LORD’S anointed, to stretch forth mine hand against him, seeing he is the anointed of the LORD.”

My friend, if you want to know the character of a man, observe his actions when his enemy is vulnerable.  Vengeance is God’s business (24:8-12).

In spite of the king’s faults, David reflected humility and honored the king in four ways (24:8-10).  The first, he addressed the king with the respect due his office, “My lord the king” (24:8).  The second, he honored the king in his manner when he “stooped with his face to the earth, and bowed himself” (24:8).  The third, he entreated the king with a question, not an accusation when he asked, “Wherefore hearest thou men’s words, saying, Behold, David seeketh thy hurt?” (24:9).  Finally, he proved the evil reports the king had entertained about him were false by his actions…when he had opportunity to kill the king he spared him (24:11).  Rather than revenge, David turned Saul over to the LORD to deal with him (24:12, 15).

Caution: Revenge is the course sin takes when anger and bitterness rule the heart.

Ephesians 4:31-32 – “Let all bitterness, and wrath, and anger, and clamour, and evil speaking, be put away from you, with all malice: 32 And be ye kind one to another, tenderhearted, forgiving one another, even as God for Christ’s sake hath forgiven you.”