To set today’s scripture reading in context, the focus of this devotional commentary is Exodus 12 that addresses the preparations for the tenth plague and the institution of the Passover and the Feast of Unleavened Bread.

Taking its name from the LORD sparing His people the tenth plague that struck the firstborn of Egypt, God instructed Moses to institute the Passover  (Exodus 12:1-14, 27-28).   The LORD directed Moses and Aaron to command every household to sacrifice a lamb; not just any lamb, but a lamb “without blemish, a male of the first year” (12:15).   Putting the blood of the lamb on the side posts and lintel of the doorposts of the houses (12:7), the LORD promised He would “pass over” their homes when He saw the blood of a lamb (12:12-13).

The perpetual observance of the “Passover” was to serve as a lasting memorial and testimony of the night the LORD spared the firstborn of Israel because of the blood of the lambs that were slain.  The family was to eat the passover lamb with “unleavened bread; and with bitter herbs” (12:8-11, 14-19). 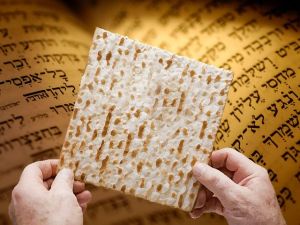 “Leaven”, in our modern vernacular the equivalent of yeast, was not used in bread during the Passover season (12:15, 17-20).  Leaven consisted of dough that had been leftover from a previous day and allowed to ferment.  Taking a pinch of fermented dough and kneading it into a fresh batch of flour dough would in time permeate the whole and cause the bread to rise.  The permeating nature of a little leaven is in the scripture a symbol of the nature of sin; in other words, sin is among God’s people what leaven is in bread dough and, “A little leaven leaveneth the whole lump” (Galatians 5:9).  As a reminder that God does not tolerate sin among His people, leaven and leavened bread was forbidden in Hebrew households during the Passover (12:15, 19-20).

I hope to post a devotional commentary on Exodus 13-16 before this day has passed; however, the application of Exodus 12 is too important to overlook.  The Passover, the sacrifice of a lamb without blemish, was necessary to set a distinction between Egypt and Israel.  Nine plagues had given Pharaoh and Egypt the incontestable evidence that Israel’s God was the God of creation.  Egypt and her king; however, had hardened their hearts and refused to heed God’s command.

To spare Israel the tenth plague, the death of the firstborn, the LORD required the blood of the lamb as a testimony of the penalty of sin; without the blood of the lamb the household would be slain. So it is for all sinners because the penalty of sin is death (Romans 6:23a) and, “without shedding of blood is no remission [forgiveness; deliverance]” (Hebrews 9:22).  All the lambs sacrificed were a type, a picture, of God’s punishment of sin fulfilled in the sacrifice of His Son, Jesus Christ. The author of Hebrews writes: “So Christ was once offered to bear the sins of many” (Hebrews 9:28).   Paul writes in his letter to believers in Corinth,

“For He [God] hath made Him [Jesus Christ] to be sin for us, who knew no sin; that we might be made the righteousness of God in Him” (2 Corinthians 5:21).

The difference between Israel and Egypt was the Israelites, as an act of faith, applied the blood of the lamb to the doorposts of their homes and when the LORD saw the blood He passed over sparing the firstborn.  Believer, you are spared the penalty of your sins, not because of any good works you have done (Ephesians 2:8-9), but because your faith is in the redemption and forgiveness of sin we have in Christ, God’s sacrificial Lamb (Romans 3:23-25, 28). 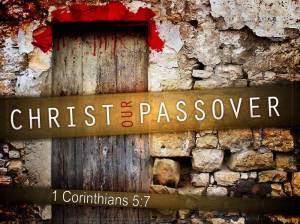 In closing, let’s take a lesson from the LORD’s intolerance of leaven in the households during the Passover.  With the blood of the lamb applied to the doorposts, leaven, a symbol of sin, had no place among God’s people.  Friend, that fact is no less true in your life, home, church or school.  Sin, like leaven in bread during the Passover, is intolerable in the lives of God’s people and the Church (1 Corinthians 5:6).  Paul instructed the Church to, “Purge out therefore the old leaven…keep the feast…with the unleavened bread of sincerity and truth” (1 Corinthians 5:7-8).  For a practical application, what is the application for purging sin from our lives, homes, church and institutions?   We are to be intolerant of sin in our midst (Hebrews 18:15-17)!

1 Corinthians 5:9, 11, 13 – 9  I wrote unto you in an epistle not to company with fornicators…11  But now I have written unto you not to keep company, if any man that is called a brother be a fornicator, or covetous, or an idolater, or a railer, or a drunkard, or an extortioner; with such an one no not to eat…
13  …Therefore put away from among yourselves that wicked person.”

Wonder why Bible believers and our churches are so spiritually anemic?  Begin here…for sin, like leaven, will inevitably pollute the whole if it is not purged from the church.