From the humble life of a shepherd to a warrior king, king David continues his celebrated conquest over Israel’s enemies in 2 Samuel 10.  Sadly, the same cannot be said as we come to 2 Samuel 11 and read a statement that is a premonition of tragedy for, “at the time when kings go forth to battle…David tarried still at Jerusalem” (2 Samuel 11:1).

David is at least fifty years old and has faithfully served Israel as king for twenty years.  His has been a household name since slaying Goliath as a teenage boy and his exploits on the battlefield the subject of renown and the inspiration of songs celebrating his courage and heroism (1 Samuel 18:7; 12:11).

However, David was a man like all men and we take a lesson from 2 Samuel 11 that should serve as a warning:  Forgetting the frailty of human flesh (Psalm 51:5) and promoting leaders to pedestals can have grave consequences for the man, his family, and those he serves.

Contrary to the law (Deuteronomy 17:16-17), David had taken to himself “more concubines and wives” (2 Samuel 5:13), feeding his passion for sexual pleasure while neglecting his duty to lead the nation.   He was at the height of his success and was enjoying God’s blessings.  The nation was strong and prosperous; however, we find David lounging on his bed when he should have been on the battlefield (11:2).  His idleness coupled with a lack of accountability (after all, who is going to confront an all-powerful eastern monarch) became the catalyst for a tragic series of wicked decisions that forever scarred his life, family, and reign (2 Samuel 11:3-15).

2 Samuel 11:3-5 – “And David sent and enquired after the woman. And one said, Is not this Bathsheba, the daughter of Eliam, the wife of Uriah the Hittite?
4  And David sent messengers, and took her; and she came in unto him, and he lay with her; for she was purified from her uncleanness: and she returned unto her house.
5  And the woman conceived, and sent and told David, and said, I am with child.”

How far will a “man after God’s own heart” fall?  Lust, adultery, deceit, guile and murder…all are sins that would haunt David the rest of his life.  The ripple effect of his sins on his family and the lives of others are incalculable.

The king maintained a semblance of normality for almost a year as he sat in his judgment hall conducting the affairs of state.  On the outside things appeared routine; however, David would later write of this time in his life, “When I kept silence, my bones waxed old through my roaring all the day long. [4] For day and night thy hand was heavy upon me: my moisture is turned into the drought of summer” (Psalm 32:3-4). 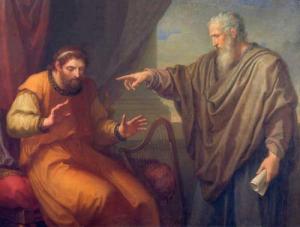 Finally, God sent a man of integrity and courage to speak the truth to the king…the prophet Nathan stands before David’s throne and says, “Thou art the man” (12:7). David’s soul was smitten with conviction; he was “the man”…an adulterer, murderer…a wretched, miserable soul (12:8-12).

David’s proud, hypocritical façade crumbled (12:13), his heart-broken over the sorrow he had brought upon his family (12:15-17) and he prayed:

Psalm 51:3-4 – For I acknowledge my transgressions: and my sin is ever before me. [4] Against thee, thee only, have I sinned, and done this evil in thy sight: that thou mightest be justified when thou speakest, and be clear when thou judgest.

There is so much more that I could detail in the next two chapters (2 Samuel 13-14) that reveal the tragic consequences of David’s sin and its effect on his household; however, I will leave that commentary to another day.

I close by inviting you to turn the spotlight of truth and focus it on your own heart and life. Someone reading this devotional may be idling away time and others are trifling with temptation…I challenge you to, “Flee also youthful lusts” before it is too late (2 Timothy 2:22)!  If you are in a web of sin and deceit, be forewarned: “He that covereth his sins shall not prosper” (Proverbs 28:13a).  Friend, the issue is not “if” you are going to get caught, but “when”; however, there is hope for, “…whoso confesseth and forsaketh them [sins] shall have mercy” (Proverbs 28:13).