Today’s reading brings us to the closing chapters in the Book of Job and the conclusion of trials and troubles that shadowed Job’s life throughout our study.

God patiently allowed Job’s “friends” to accuse the poor man of concealing a sin that was the cause of his sorrows and He heard Job’s defense.  The LORD began to address Job with a series of questions in chapter 38 and invoked the man to turn his thoughts from himself to the glory and majesty of his Creator. 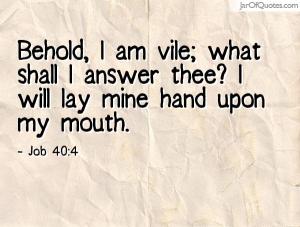 Having pondered the reality of God’s majesty, power, and sovereignty over His creation, Job replied, “Behold, I am vile [cursed; despised]; what shall I answer thee? I will lay mine hand upon my mouth [i.e. silent; have nothing to say]. 5  Once have I spoken; but I will not answer: yea, twice; but I will proceed no further” (Job 40:4-5).

Hearing Job’s confession, the LORD suddenly appeared in the midst of a great windstorm and began to speak and challenge Job in a series of penetrating questions meant to move Job to have a right perspective of himself and God (40:6-9).  The LORD continues to question Job in chapter 41.

Realizing it is impossible to address the series of questions in a brief devotional commentary, I will make a few passing observations.

The LORD invited Job to consider the “leviathan” in Job 41:1.  The identity of this great creature is uncertain; however, some scholars suggest it was a giant saltwater crocodile.  Perhaps it was a giant creature of the sea that is extinct, but whose remains we identify today as those of a dinosaur.  Either way, the analogy draws Job to conclude that man is foolish to question his Creator when he pales in size and strength to the majestic creatures God has created (41:1-9).

God challenged Job to consider, if man cannot tame a “leviathan”, he has no right to question or stand before God (41:10-33).  The LORD declares of Himself,  “He beholdeth [considers; sees] all high things [i.e. He is Master of His creation]: He is a king over all the children of pride” (41:34).

Having heard God’s revelations of Himself and pondered the evidences of the LORD’s power and might as sovereign of His creation, Job humbled himself and confessed, “I abhor [despise] myself, and repent in dust and ashes” (Job 42:1-6).

God turned the focus of His wrath toward Job’s foolish “friends” (42:7-9) and commands “Eliphaz the Temanite” and Job’s other “friends” to go to Job with sacrifices, humble themselves, and ask the very man they had condemned to pray for them (42:8-9).  Job, evidencing the grace of a humble, repentant man of God, “prayed for his friends” and God rewarded him with “twice as much as he had before” (42:10).

Consider with me a few closing thoughts on “Fair-Weather Friends” from Job 42:11.

Job 42:11 – “Then [i.e. after God prospered Job “twice as much”] came there unto him all his brethren [kindred], and all his sisters, and all they that had been of his acquaintance [i.e. friends and neighbors] before [before Job’s trials], and did eat bread with him in his house: and they bemoaned [i.e. showed sympathy] him, and comforted [pitied] him over all the evil [troubles] that the LORD had brought [i.e. allowed to enter] upon him: every man also gave him a piece of money, and every one an earring of gold.”

I find Job 42:11 sadly familiar for anyone who has gone through difficult times that brought extended sorrows.  We have studied forty-two chapters in the life of Job and, with the exception of his wife who in the midst of her own anguish suggested Job curse God and die and four “friends” who proposed to be his counselors but became his critics, all other acquaintances in Job’s life have been strangely absent. Suddenly, with the hard times past and Job enjoying financial prosperity again, we read: “Then [i.e. after God prospered Job “twice as much”] came there unto him all his brethren [kindred], and all his sisters, and all they that had been of his acquaintance [i.e. friends and neighbors] before [before Job’s trials]” (42:11).

Where were these “brethren” and “sisters” when Job lost everything?  Where were Job’s acquaintances when he lost his sons and daughters, servants, home, physical health and possessions?  Why appear now to show sympathy and comfort?  Why wait to bring Job “a piece of money” and gold earrings after God has begun to pour out his blessings on Job and he has need of nothing?

Some reading this devotional commentary are and have been “fair-weather” friends to family, friends, and spiritual leaders.

You went MIA when loved ones needed you most.  You stopped calling when you could have encouraged.  You stopped visiting when a shoulder to cry on would have brought welcome relief.  When you should have offered a word of encouragement, you were silent.  When you were needed most, you departed and forsook your family, friends, church and pastors.

Friend, look into the mirror we find in Job 42:11, humble yourself and go to your “friend” if you were a “fair-weather” friend when you were needed most.

I confess, after thirty-eight years of ministry, I have had my share of “fair-weather” friends; however, my heart rejoices in the knowledge God prospered Job in his last years and he “died, being old and full [satisfied] of days” (Job 42:10, 17).