Fulfilling his father’s dream and honoring his legacy, Solomon set about acquiring the building materials necessary for constructing the Temple in Jerusalem (1 Kings 5).  Requesting the assistance of his father’s friend, Hiram king of Tyre, Solomon ordered cedars from Lebanon and skilled laborers “to hew timber” (5:6). Hiram agreed to supply cedar and fir timbers for the Temple, floating them on the Mediterranean Sea to a port designated by Solomon (5:7-10).  In turn, Solomon gave provisions of wheat and pure oil to Hiram (5:11-12).  Thousands of laborers employed in acquiring construction materials (5:13-18) reveals the size and scope of the Temple project.

1 Kings 6 describes the exterior dimensions of the Temple and the details of its interior chambers (6:1-10).  The beams of the Temple rested on the walls of the building (6:6). Because God prohibited the use of tools on the building site, the large stones of the Temple walls were pre-cut at the quarry  (6:7-10).  In the midst of the construction, the LORD assured Solomon, if he would walk in His statutes and keep His commandments, He would dwell in the midst of Israel and keep His promises (6:11-14).

The exact dimensions and description of the “Holy of Holies”, the small room where the Ark of the Covenant, would be concealed is given.  The beauty of the room with its ceiling and floor of cedar and carved paneled walls featuring flowers and all overlaid with a veneer of pure gold was exquisite to behold (6:15-30).

Because his reign was one of peace, Solomon was able to dedicate himself to many construction projects.  While the Temple required seven years to build (6:38), Solomon’s palace was under construction for thirteen years, the details of which are given in 1 Kings 7:1-12.  Solomon’s second house, described as “the house of the forest of Lebanon”, is also described (7:2-8). Solomon built an additional house for a wife who was “Pharaoh’s daughter” (7:8).

Enlisted to make intricate, elaborate pieces of brass, silver and gold was an artisan named Hiram, but not the same Hiram who was king of Tyre (7:13-51).

1 Kings 8 records Solomon’s dedication of the Temple along with the leaders of Israel (8:1-2).  After moving the furnishings into the Temple, including the Ark of the Covenant representing God’s throne in heaven in the midst of His people, a “cloud filled the house of the LORD” (8:10).  Indeed, “the glory of the LORD” so filled the Temple the “priests could not stand to minister” (8:11).

Why? Why were the priests unable to minister in the Temple after the LORD’s glory filled the house?

I remind you the God of Heaven is a Holy, glorious God with whom mortal man dare not trifle. We read in Exodus 24:17 that the “glory of the LORD was like devouring fire”. Deuteronomy 4:24, “the LORD thy God is a consuming fire”. 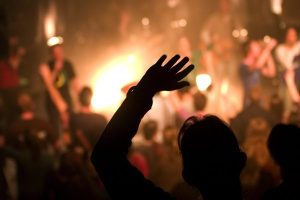 What passes as worship in the 21st century church with its focus on entertaining the masses with strobe lights, head-banging music and a driving drumbeat is the antithesis of the worship we find in 1 Kings 8:11 where the presence of God was so powerful and convicting the priests “could not stand to minister” (1 Kings 8:11a).

The dedication of the Temple continued with Solomon sharing how his father had longed to build the Temple of the LORD, but God prohibited him.  That privilege passed to David’s son (8:12-21).  Solomon offered a prayer of thanksgiving and dedicated the Temple before the people (8:22-53).

1 Kings 9 is God’s response to Solomon’s prayer of dedication for the Temple and His promise to  bless the king if Solomon would be a man of “integrity [upright; innocent] of heart, and in uprightness [honesty; walking a straight path], to do according to all that I have commanded thee, and wilt keep [observe; heed] my statutes [ordinances; rules; laws] and my judgments [verdict]” (9:4).

God warned Solomon, should he or his children disobey His Law and commandments and serve idols, the nation would be “cut off” and everyone would know they had “forsook the LORD their God” and He brought judgment against Israel (9:5-9).

The closing verses of 1 Kings 9 detail for us the cities Solomon built with Gentile slave laborers (9:15-24). With the assistance of Hiram, king of Tyre, Solomon built a navy of ships (9:26-28).