Today’s scripture reading is Proverbs 2-3; however, the focus for this devotional commentary is limited to Proverbs 2:12-13.

In today’s devotional, Solomon advises his son that godly wisdom will induce him to be wary of two enemies of youth: Wicked men and their influence (Proverbs 2:12-15) and the Adulterous woman and her ways (Proverbs 2:16-19).  For the sake of brevity, I will focus on two of the four proverbs that serve as warnings concerning wicked men. 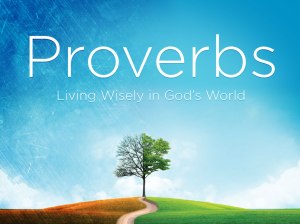 Proverbs 2:12-13 – “To deliver [rescue; save] thee from the way [path; course of life] of the evil man [wicked], from the man that speaketh [tell; say] froward things [lies and perverseness]; 13 Who leave [forsake; abandon; depart from; loosen] the paths [way; manner; race; troop] of uprightness, to walk in the ways [path; course of life] of darkness [i.e. ignorance; sorrow];”

Preparing his son who will one day serve the nation as king, Solomon exhorts him to embrace godly wisdom and allow righteous discernment to set the course of his life.  Godly wisdom, the wisdom God alone imparts from His Word, directs youth to not only recognize the character of the ungodly, but turn from their counsel [i.e. “froward things”].

Wicked counsel often comes from those who, to borrow an old expression, “should know better”.  Solomon exhorts his son, be cautious of those who once knew and appeared to follow the “paths of uprightness” but have departed (2:13).  The Apostle Paul challenged Timothy with a similar admonition when he wrote that the last days would be “perilous” because there would be some who have “a form of godliness, but denying the power thereof: from such turn away” (2 Timothy 3:5).

A personal observation: Our churches, Bible colleges and seminaries are heavily influenced by a host of men and women who hurl the “legalist” label at those who choose to take what I define as the “higher road”.

This generation of Christian leaders has focused on “Liberty” to indulge “grey areas” previous generations of Christians steered from out of concern for passions they might induce and the influence they carried.  In their pursuit of the more “enlightened life”, many Christian leaders have become advocates of driving near the cliff edge as opposed to steering far from danger.  They have become what Solomon cautioned—those who have forsaken the paths of the upright only to “walk in the way of darkness” (2:13).

Be careful my friend; the tantalizing “Liberties” you trifle with today can enslave and traumatize your children tomorrow.