I am posting two versions of today’s devotional commentary from 1 Kings 19-22.  This blog post is an abbreviated version of a longer one that will soon follow.

We conclude our study of 1 Kings with Jehoshaphat, the godly king of Judah allying himself with king Ahab against the king of Syria.  This final chapter records Ahab’s death on the battlefield against the king of Syria and the fulfillment of Elijah’s prophesy that the dogs would lick his blood as they had Naboth’s (22:37-40).  However, rather than focus on Ahab’s death, I draw your attention to the confrontation between Ahab and a prophet identified as “Micaiah the son of Imlah” (22:8).

Evidencing the nature of a godly king, Jehoshaphat the king of Judah, desired the LORD’s direction before going to battle (22:5).  Ahab complied with Jehoshaphat’s request and gathered nearly four hundred prophets who falsely prophesied the LORD would give Israel and Judah victory on the battlefield over the king of Syria (22:6).  In spite of the prophesies of nearly four hundred men, godly Jehoshaphat was not satisfied and enquired if there was not another prophet in Israel (22:7). 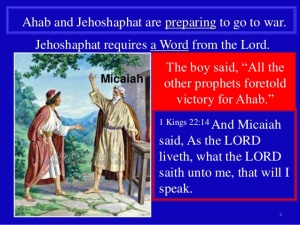 Now there was one prophet in Israel who had not received the invitation to prophesy before the kings, “Micaiah the son of Imlah” (22:8).  Ahab explained Micaiah had not been invited to prophesy saying, “I hate him; for he doth not prophesy good concerning me, but evil” (22:8).

King Ahab complied with Jehoshaphat’s request and Micaiah was summoned to stand before the kings and prophesy (22:9-10).  Sitting in the “gate of Samaria”, the most public venue in the capital, Ahab’s prophets, led by one named Zedekiah, agreed in their prophesy that the LORD would give Israel and Judah victory over Syria (22:10b-12).  The servant Ahab sent to invite Micaiah to prophesy warned him the other prophets were of “one mouth: let thy word, I pray thee, be like the word of one of them, and speak that which is good” (22:13).

In a moment of irony, Micaiah prophesied exactly what Ahab wanted to hear (22:15); however, the king rebuked him and demanded, “How many times shall I adjure thee that thou tell me nothing but that which is true in the name of the LORD?” (22:16).

Micaiah answered, prophesying Ahab would die and Israel would be “scattered upon the hills, as sheep that have not a shepherd” (22:17).  Acknowledging his own self-fulfilling sentiment, Ahab said to the king of Judah, “Did I not tell thee that he would prophesy no good concerning me, but evil?” (22:18).

Micaiah completed his task as God’s prophet, boldly confronting Zedekiah and the four hundred men who prophesied lies with him (22:19-23), declaring the true prophet would be revealed by whose prophesy came to pass (22:24-25).  As prophesied, Ahab died in battle and the people were scattered (22:36-40)

I close today’s devotional commentary noting Ahab’s disdain and reluctance to invite Micaiah to prophesy, because “I hate him; for he doth not prophesy good concerning me, but evil” (22:8), has become, in my opinion, the malady of Bible fundamental churches, schools, and institutional boards.

Is that not the nature of sinners?  Pulpits of what were once thriving Bible fundamental churches are being filled with preachers dedicated to soft-pedaling God’s Word, appeasing the masses and giving them what they want to hear.

Pulpit committees, deacon boards, and boards of Christian schools and institutions are dedicated to insuring the voices heard in boardrooms and pulpits are those that will “prophesy good” while they dismiss and silence pastors, administrators, and faculty who are willing to give a clarion call concerning the way of sin and compromise.  Like Micaiah, because their voices are not in harmony with the sentiment of the majority, they are undesirable and unwelcome.

While Jehoshaphat desired to hear a true word of prophecy; Ahab was committed to the prophets that would tell him what he wanted to hear and he and all Israel suffered failure.

The same is no less true of our churches, schools and institutions.  Dismiss the warning of faithful men and you do so to your own demise.