Continuing our reading in Ezekiel, we noted in prior chapters God’s love and jealousy for Israel and Judah (Ezekiel 25-30).  The rebellion of His people invited His judgment; however, the pleasure the heathen nations took in Israel’s suffering provoked God’s wrath and He warned they would fall to Babylon.  Named among those nations is Egypt whose treasures would be taken by king Nebuchadnezzar (Ezekiel 29:1-21).

Ezekiel 31 continues God’s warning of judgment against Egypt.  Nebuchadnezzar and his Chaldean army’s devastating overthrow of ancient Assyria, likened in chapter 31 unto the great oaks of Lebanon, served as God’s warning to Egypt (31:1-18).

Ezekiel continues his prophecy of judgment against Egypt in chapter 32, prophesying that nation’s calamity would serve as a warning to other nations (32:1-10).   Giving no room for ambiguity, Egypt’s fall to Babylon is ascertained (32:11-15).   Picturing Hell for what it is, a place of death and torment for the lost who reject the LORD (32:17-32), the Egyptians are forewarned they will make their graves with those nations that have gone before them.

Ezekiel 33-35 moves the focus from Egypt’s imminent destruction to the prophet Ezekiel’s responsibility as God’s watchman.

The task of a prophet is not an enviable one and the message he delivers is often despised and rejected by his listeners.  While the message of an Old Testament prophet is often foretelling, his focus is never exclusively future events.  Ezekiel, like  Jeremiah, Isaiah and others, was to remind Israel of her glorious past, discern the present times and declare God’s judgment should the people continue in their sins (33:1-9).

It is the latter work of the preacher\prophet, the forth telling and unapologetic declaration of God’s Word, that has all but been silenced by the 21st century church.  I have heard of church boards and schools that purpose to depart from the Bible fundamental legacy of the church and court pastors and administrators who disavow the role of the watchman.

Rather than confront the sins of the Church, the pulpiteers of our day offer up drops of honey and philosophical charm to a generation of professing believers given to sin.  Fearing noxious labels like legalist and mean-spirited, pastors are failing to serve as “watchmen”.  The sound of the trumpet warning the people of God’s judgment is silent and pastors and Bible teachers are guilty of soft-pedaling God’s call and command to be holy (1 Peter 1:15-16).

Lest some take my observation to task, I remind you the duty of the New Testament pastor is to, “Preach the word; be instant in season, out of season; reprove, rebuke, exhort with all longsuffering and doctrine” (2 Timothy 4:2).

Be forewarned my pastor peers; the blood of a generation will be on our heads should we fail as God’s watchman (Ezekiel 33:8).

Ezekiel, living as a captive in Babylon and far from Jerusalem, called His people to repent (33:1-20).  When the news of Jerusalem’s fall reached him, the LORD consoled him, though the people refuse to heed his warning, they would “know that a prophet hath been among them” (33:33).

Ezekiel rebukes unfaithful “shepherds” for their failure to lead the people (Ezekiel 34).  Failing to guide and nourish them, the “shepherds” took advantage of the weak and abused their roles as the spiritual caregivers of Israel (34:1-8).  Having failed in their duty, the LORD warned, “I am against the shepherds” (34:9-10).

In spite of the dire state of His people, the LORD assured His prophet that He would gather them together as a loving shepherd gathers His sheep (34:11-31). 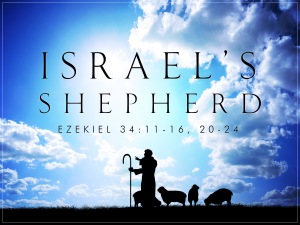 I close today with a charge to ministers and Bible teachers who are faithful shepherds of God’s people.

Our task as preachers and teachers of Truth is not appreciated by many and some might say we are failures.  Be faithful friend and take solace in this; one day some will “know that a prophet hath been among them” (33:33)!