Our scripture reading today is three psalms, Psalm 93, Psalm 94 and Psalm 95.  For the sake of brevity, my devotional commentary will focus on Psalm 93.

Scholars believe Psalm 93 was written after the Babylonian captivity when the Jews returned from exile during the reign of Cyrus of Persia.  In a matter of 70 years, Israel had witnessed the implosion of Babylon, arguably the first great world empire.  Nebuchadnezzar had conquered the known world in his day and among the many nations led away to serve him was Israel.  Unlike other ancient nations that resettled and assimilated by the Chaldeans, the Jewish people maintained their identity as a chosen people, distinguished by God’s Law.

Israel’s return to their land and the rebuilding of the Temple and city of Jerusalem gave cause for the author of Psalm 93 to state three truths regarding God and His immutable character.  For the sake of this study, I will post my amplification of the text in a cursive font.

The first principle is, God is Sovereign and His Rule is Forever (93:1-2).

Psalm 93:1-2 – The LORD [Jehovah; the Eternal, Self-Existent God] reigneth [He reigns as King], he is clothed [wrapped in a robe] with majesty [lofty; exalted]; the LORD is clothed [wrapped in a robe] with strength [power; might], wherewith he hath girded [compass or encircled; clothed] himself: the world also is stablished [anchored; immovable; firm], that it cannot be moved [slip; waver; fall; brought down]. 2  Thy throne [place of authority] is established [anchored; immovable; firm] of old [from the beginning; since time began]: thou art from everlasting [eternal; forever; perpetual; always].

A study of world history yields the reality even the greatest nations rise and fall.  With the passing of time, every nation that has ever taken its place on the world stage inevitably evidences corruption and the decay of character and morality.  Such is not the case with the LORD whose sovereignty over His creation is majestic, unwavering and everlasting.  Nations rise and nations fall. Kings rule and presidents preside, but the reign of the LORD is everlasting. 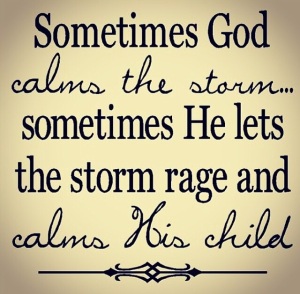 The second principle is, God is Greater than My Circumstances (93:3-4).

Psalm 93:3-4 – The floods [rivers; streams] have lifted up [taken away; carried away], O LORD, the floods have lifted up their voice [noise; sound; thunder]; the floods lift up their waves [i.e. pounding, crashing waves].
4  The LORD on high [above; i.e. sits in the highest place] is mightier [glorious; majestic] than the noise [sound; thunder] of many [great; much] waters, yea, than the mighty [glorious; majestic] waves [breaking, pounding waves] of the sea.

As I write this devotional some very dear friends and members of Hillsdale come to mind who are facing trials and troubles that might easily overwhelm them if it were not for the promise we find in verses 4: “The LORD on high is mightier” (93:4).

Mighty, destructive floodwaters are the picture the psalmist draws upon to describe circumstances that are powerful, sweeping and devastating (93:3).  Whether in person or on news broadcasts, we have witnessed the devastating power of floodwaters sweeping away everything in their path…homes, possessions, even lives are lost to the power of surging waters.

God’s Word and promises never fail.  Israel’s return to their land as a nation fulfilled God’s promise He would not forget or forsake His people.  Surely there were times in Babylon when all seemed lost; the temple destroyed, the walls and city of Jerusalem had become nothing more than a pile of debris and the people removed from their land.  However, not a promise of the LORD had failed and the Jews were restored to their land.

Friend, take heart, God is Sovereign, greater and mightier than your circumstances, faithful to His promises, and His residence is holy forever!