Our “Read-Thru the Bible” plan brings us today to Numbers 5-8.  As noted in an earlier commentary, the early chapters of Numbers are for the purpose of organizing hundreds of thousands of men and women who for 400 years knew only the burdens of slavery.   God tasked Moses with the responsibility of bringing discipline to the Twelve Tribes of Israel and organizing them into a body that will become a nation.

Numbers 1:2-54 recorded a census of able-bodied males, 20 years and older, who were able to go to war (Numbers 1:2-54).   Numbers 2 provided an organizational map of Israel’s encampment with the Tabernacle representing the presence of God being the central focus of the tribes.   Numbers 3 records a census of the Levites, the priestly tribe and their responsibility for the Tabernacle is found in Numbers 4.

While the Commandments of the LORD are recorded in Exodus 20 and Deuteronomy 5, the specifics for addressing disease and sin in the midst of the people is given in Numbers 5.  God desired that His people be a clean and holy people and the people were to be intolerant of sin in their midst.  Contagious diseases like leprosy were not trifled with and sin was confessed and restitution made where another had been injured (5:1-10).

Because marriage is a holy covenant between a man and woman instituted by God, the nation was intolerant of adultery and an adulterous man and woman would be put to death (5:11-31).

Numbers 7 records the dedication of the Tabernacle, the altar, instruments and vessels employed in offering sacrifices and the sacrifices brought by the tribal leaders of Israel (Numbers 7:1-89). 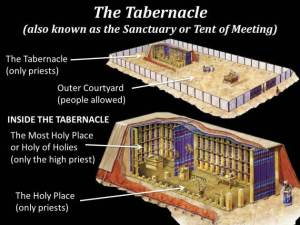 Numbers 8:1-4 takes us into the inter-sanctum of the Tabernacle and the area that was veiled from all but the high priest and known as the “holy of holies”.  Within this sacred place there was a golden altar, a table, and a golden lampstand with seven candles.

While Aaron and his sons served God as priests, the tribe of Levi was consecrated to assist the priests and serve the people when they came to worship and offer sacrifices (Numbers 8:5-26).  The leaders of the tribes put their hands on the Levites identifying them as the substitute who would serve the LORD on their behalf (8:9-11).   Rather than the eldest son of each tribal family being set apart to serve as priest for the family, God chose the Levites to serve on their behalf (8:14-18).

I close this devotional acknowledging much of what you read might leave you at a loss for a personal application.  Consider the following lessons:

1) The LORD wants those who minister before His people to be a holy, consecrated people.  Although none are perfect or sinless, the church should hold its ministers, pastors and teachers to the highest standard knowing God would not require less.

2) Whether a Nazarite or a Levite, the privilege of serving the LORD required consecration and sacrifice.  I remind you God requires the same of us all when Paul writes:

Romans 12:1-2 – “I beseech you therefore, brethren, by the mercies of God, that ye present your bodies a living sacrifice, holy, acceptable unto God, which is your reasonable service.
2  And be not conformed to this world: but be ye transformed by the renewing of your mind, that ye may prove what is that good, and acceptable, and perfect, will of God.”

I close today’s commentary with a prayer for God to bless you, a prayer know as the Aaronic Blessing: