Our scripture reading this Saturday, September 30, 2017 introduces us to a pivotal book in the New Testament, the Book of Acts, also known as the “Acts of the Apostles”.   As its name implies, the Book of Acts records the actions and activities of the Apostles following Christ’s bodily resurrection and translation to heaven after commissioning His disciples to “be witnesses unto me both in Jerusalem, and in all Judaea, and in Samaria, and unto the uttermost part of the earth” (Acts 1:8).

Jesus appeared to His followers on at least ten separate occasions following His resurrection from the dead.  He first appeared to Mary Magdalene (John 20:11-18; Mark 16:9) and the other women who came to His empty tomb (Matthew 28:8-10).  He then appeared to Peter (Luke 24:34; I Corinthians 15:5) and to two followers on the road to Emmaus (Luke 24:13-35).   Later He appeared to ten of the disciples, less Thomas who was absent and Judas who had betrayed Jesus and hanged himself (Luke 24:36-43; John 20:19-29).  Eight days later He appeared in the midst of the eleven disciples, this time with Thomas present (John 20:24-29).   Jesus appeared to seven of the disciples at the Sea of Tiberias, known to the Jews as the Sea of Galilee (John 21:1-23).  In his epistle to the church at Corinth, Paul recorded Jesus’ appearance to five hundred followers and then to James (I Corinthians 15:6-7).  He last appeared to the eleven disciples before He ascended to heaven (Acts 1:3-12). 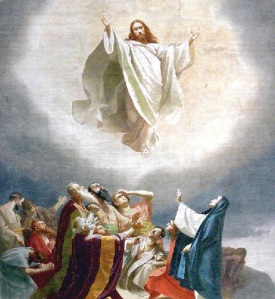 There are several foundational truths in this introduction to the Book of Acts.   Because the literal bodily resurrection of Jesus Christ is the central hope of Christianity (Luke 24:39-40; 41-43; Acts 1:3), Jesus stayed with His disciples forty days and emboldened them with “many infallible proofs”, an experience that forever changed their lives (Acts 1:3).

Jesus exhorted His disciples to “WAIT for the promise of the Father…ye shall be BAPTIZED with the Holy Ghost” (1:4-5).  Before He ascended to heaven He commissioned them to be witnesses (Acts 1:8) and as they watched, Jesus “was taken up; and a cloud received Him out of their sight” (Acts 1:9).  Two angels, appearing as men in “white apparel”, appeared giving the disciples a promise that has been the hope of believers for 2,000 years… “…this same Jesus, which is taken up from you into heaven, shall so come in like manner as ye have seen him go into heaven.” (Acts 1:11).

The reality of a crucified, risen and returning Savior transformed the disciples from self-promoting sinners arguing among themselves who should be the greatest (Luke 9:46, 22:24), to servants asking nothing for themselves and left wondering when Christ would “restore again the kingdom to Israel” (Acts 1:6).

One of the many lessons we can take from Acts 1-2 is:

When God’s people remember the main thing is a crucified, risen, and returning Savior, conflicts and divisions cease in the church.

The imminent return of Jesus Christ forever changed the disciples’ perspective on their own lives and ministry.   James would write to the early church, “From whence come wars and fightings among you? come they not hence, even of your lusts that war in your members?” (James 4:1).  Knowing Jesus Christ promised to return, but not knowing the hour, James exhorted believers:

James 5:7-9 – Be patient [longsuffering; slow to anger] therefore, brethren, unto the coming of the Lord. Behold, the husbandman [farmer] waiteth for the precious fruit of the earth, and hath long patience for it, until he receive the early [autumn] and latter [spring] rain. 8 Be ye also patient; stablish your hearts [keep hope alive]: for the coming of the Lord draweth nigh. 9 Grudge not [stop complaining & grumbling] one against another, brethren, lest ye be condemned: behold, the judge standeth before the door.

Are you ready for His coming? It may be today!