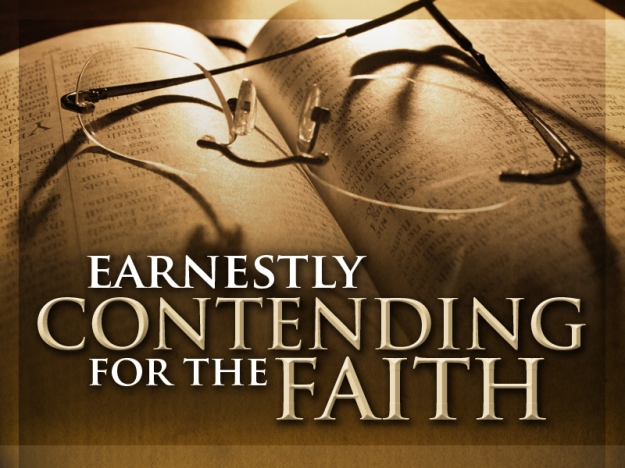 The theme of the book of Jude, only 25 verses in length, is summed up in two words, exhortation and admonition:  Jude exhorts believers to “earnestly contend for the faith” (Jude 1:3) and admonishes the church to beware of apostasy.

A century ago, the pulpits of most Baptist and Protestant churches in America unapologetically preached the Gospel of Jesus Christ.  There were differences in the mode of baptism and church government; however, the preaching of the cross was almost a universal theme in America’s churches.

By the 1920’s a spiritual apostasy crept into many denominational churches and began eroding fundamental Bible doctrines.  Bible colleges and Seminaries became hotbeds of liberalism and apostasy.  In a generation, mainline Protestant churches departed from the fundamental doctrines of the Christian faith.

Christ taught His disciples a sign of His Second Coming would be, “many false prophets shall rise, and shall deceive many” (Matthew 25:5, 11).

The apostle Paul warned Timothy, “For the time will come when they [professing believers in the church] will not endure [tolerate] sound doctrine; but after their own lusts [sinful desires] shall they heap [invite] to themselves teachers, having itching ears [desiring to hear something that tickles, scratches or pleases the ear]; 4 And they shall turn away their ears [stop listening] from the truth, and shall be turned [aside] unto fables [myths; false teaching]” (2 Timothy 4:3-4).

The book of Jude, written to the late 1st century church, warned believers apostates were already in their midst.  Sounding a warning reminiscent of a bugle playing “Charge” for the Calvary, Jude challenged believers to engage in spiritual warfare.

“Earnestly contend for the faith” is a call to spiritual battle (1:3). To wage war for the faith is to be intolerant of doctrinal error and compromise.   Some argue, “Times have changed and Christians should not be so dogmatic about their faith.”

Times have changed; however, the Truths and Doctrines of the Word of God are timeless!

Psalm 119:160 – “Thy word is true from the beginning: and every one of thy righteous judgments endureth for ever.”

1 Peter 1:23 – “Being born again, not of corruptible seed, but of incorruptible, by the word of God, which liveth and abideth for ever.”

1 Peter 1:25 – “But the word of the Lord endureth for ever.  And this is the word which by the gospel is preached unto you.”

To “earnestly contend for the faith” is to stand and agonize unapologetically for the TRUTH.

Vigilance is the cause of the hour; however, rather than “contending for the faith”, I am afraid the majority of believers and churches are in full retreat.

The greatest threat to the Church is not persecution without, but false teachers within.