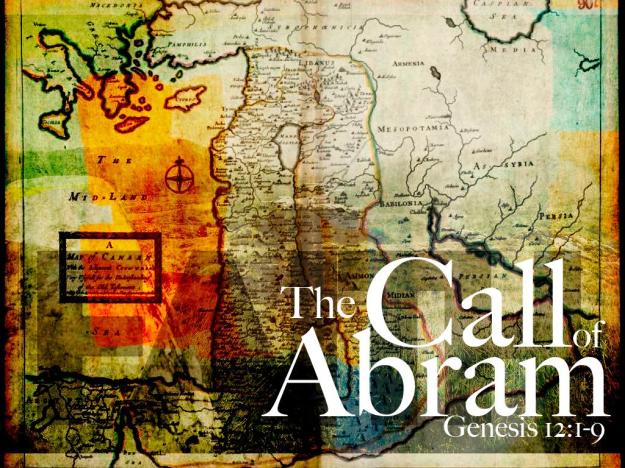 Genesis 11 closed with Abraham (Abram) departing from “Ur of the Chaldees” (located in the vicinity of what would become Babylon) with his father Terah (Genesis 11:27-32). Journeying north from Ur, Abram stopped in Haran where he remained until his father’s death (11:32).

Genesis 12 is one of the great pivotal crossroads in history and God’s plan of redemption.

The LORD commanded Abram, “Get thee out of thy country, and from thy kindred, and from thy father’s house, unto a land that I will shew thee” (12:1).  The LORD set a covenant of seven promises He would fulfill in and through Abram’s lineage (Genesis 12:2-3) if he obeyed.

Although he was elderly (“seventy-five years old” – 12:4) and childless, Abram believed God’s promises and obeyed; departing from Haran, he traveled to Canaan.  Arriving at Bethel, he built an altar and there he worshipped the Lord (12:7-8).

Soon after Abram faced a crisis of faith when we read, “there was a famine in the land” (12:10). Abandoning the land and his faith in the LORD to provide and keep His promises, Abram journeyed to Egypt; a decision that put in jeopardy God’s covenant promise of a son (12:10-13).

Now Sarai, Abram’s wife, was a beautiful woman.  Fearing for his own life, Abram requested she to tell others she was his sister (12:11-13).  Sarai’s beauty was soon noticed and Pharaoh took her into his harem putting into jeopardy God’s covenant promise of an heir she was to bear to Abram. The LORD mercifully intervened and sent a plague of judgment on Pharaoh’s household and revealed to the ruler he had been deceived by Abram (12:17-20). Sarah was spared and Abram led his household out of Egypt and back to Canaan.

The vastness of their wealth and possessions soon provoked a conflict between Abram’s servants and those of his nephew Lot (13:1-7).  To avoid strife, Abram suggested they divide their households and possessions, graciously offering to Lot the first choice of the land (13:8-9).  Rather than defer to his elder, Lot revealed the covetousness of his heart and chose the best part of the land that included the cities in the plain; among them the wicked city of Sodom (13:10-13).  Lot departed and God again renewed His covenant promises with Abraham (13:14-18).

Genesis 14 gives us a history of the nations that inhabited the land of Israel in ancient times; in the midst we read, “the kings of Sodom and Gomorrah fled…And they took Lot…and his goods” (14:10-12).  Abram had become rich and powerful; arming 318 servants (14:14) he led a mission that saved Lot, his household, and the citizens and material possessions of the cities of Sodom and Gomorrah (14:15-16).

Genesis 15 begins a narrative regarding Abram’s longing for a son and heir.  The LORD assured Abram he would have an heir, a son born to his wife Sarai (15:2-4) and his lineage would be as great in number as the stars in the heavens (15:5). In spite of their age, Abram “believed the LORD; and He (the LORD) counted it to him [Abram] for righteousness” (15:6).

God also revealed to Abraham that his heirs would be “strangers”, foreigners, in another country for 400 years (15:13); however, when the 400 years were fulfilled, they would return to Canaan with great possessions (a prophecy fulfilled when the Twelve Tribes of Israel departed Egypt after 400 years of servitude – Exodus 12-14).  Genesis 15 sets the boundaries of the land the LORD promised to give Abram and his heirs (15:18-21). 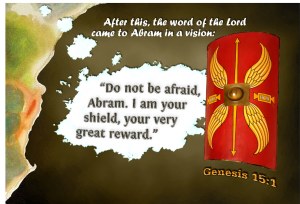 I close today’s devotional commentary with this promise:

God assured Abraham he had no cause to fear, for the LORD was his “Shield”…his protector and defender (15:1).

Friend, you may be at a time in your life that is a place of “spiritual famine.”  You are tempted to resign to fear or plan and plot your own course…Don’t abandon your faith.

Trust God to be your “Shield”, your protector and Savior.