We find Jacob leading his family spiritually and physically to Bethel, the place he had first met with and worshipped the LORD more than 20 years before (35:1).  Indicating how far his family had strayed from the LORD, we read that Jacob commanded his household to, “Put away the strange gods that are among you” (35:2).  Arriving at Bethel, Jacob rebuilt the altar and led his family to worship the LORD (35:6-7).

Jacob’s return to Bethel was not without its sorrows.  Deborah, the maid of his mother Rebekah, was the first to die (35:8).  Jacob’s beloved wife Rachel, the mother of Joseph, died giving birth to Benjamin, Jacob’s twelfth son (35:16-18).   Adding to the sorrows was the death of his father Isaac (35:28-29).

I fear Genesis 36 holds little to excite the average believer.  This chapter is the birth record of the sons born of Esau’s lineage. While the sons of Esau shared a physical lineage with the Hebrews (tracing their ancestry to Isaac and Abraham), they, like their father Esau, did not value their spiritual heritage nor share in God’s covenant promises with the descendants of Abraham. 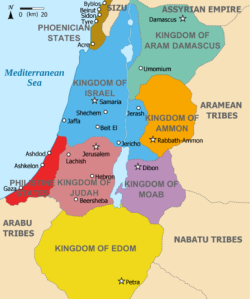 The sons of Esau became the fathers of kingdoms we recognize in the Scriptures as the nomadic tribes of the Arabian Desert.  Their descendants became enemies of Israel and their bitter strife continues in the Middle East to our day.

Esau had become a wealthy and powerful man (36:6-8) who, following their father Isaac’s death (35:29), chose to keep peace with his brother Jacob and remained in Seir (32:3).  Seir, located in Edom, was the land on Israel’s southern border stretching from the salt marshes of the Dead Sea eastward to the desert (36:6-8).  This area includes the ancient and once forgotten city of Petra.  We read an important statement in Genesis 36:8, “Esau is Edom.”

Esau was the father of a people who became known as the Edomites. When Moses led the children of Israel out of Egypt, the Edomites refused to allow them to pass through their land (Numbers 20:18-21).  The Edomites were adversaries of King Saul and King David (1 Kings 11:14-16).  When King Nebuchadnezzar invaded Israel, the Edomites became allies with Babylon and participated in the destruction of the Temple and Jerusalem.

The birth of Amalek (36:12), the father of the Amalekites and the grandson of Esau, marks the birth of another people that would become enemies of Israel.   It was the Amalekites who, during Israel’s years in the wilderness, fought against Joshua and Israel while Aaron and Hur held up the hands of Moses during a battle (Exodus 17:8-16).  We read in 1 Samuel 15 that King Saul warred against the Amalekites.

Why did God have the names of Esau’s lineage recorded in Genesis 36 and why is it important to 21st century believers?

One reason is I believe the roots of the conflict and strife we are witnessing in the Middle East and our 21st century world is traced to a people whose ancestry is that of Esau in origin.  We identify the enemies of modern Israel as Palestinians, Muslims, proponents of Islam, and the followers of the prophet Mohammed.   In the most basic sense, they are all sons of Esau.