Knowing the men of Israel would soon cross the Jordan River and begin the conquest of the Promised Land, it was important that her enemies on the east side of the Jordan be eliminated as a threat to the people in their absence.  Thus, the LORD ordered Moses to wage war against the Midianites, slaying the men of Midian, their kings and the old nemesis of Israel, the prophet Balaam (31:1-10, 16).

Having gloriously conquered their enemies without the loss of a single man (31:49), the spoils of war were to be divided among those who went to war and those who did not. The Midianite men were all slain (31:7-8); however, their women and children, flocks and herds were spared (31:9-12). 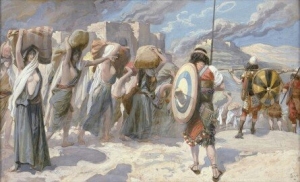 Being reminded it was important for Israel to be holy and consecrated to the Lord, Moses and Eleazar, the high priest, went outside the encampment to meet the soldiers as they returned from the battle with the spoils of war (31:13).  Lest the people be tempted to fall into sexual immorality, Moses ordered the deaths of every adult woman who had “known man by lying with him” (31:13-18).

Those men who had gone to war were commanded to purify themselves seven days before entering the camp (31:19-24).  We are once again reminded that God is just, and a fairhandedness is expressed when the spoils of war are divided.  Those 12,000 men who had warred were rewarded with half of the booty; the other half was divided among those who had not hazarded their lives in battle (31:25-54).

A Crisis of Perspective (Numbers 32)

Two and a half tribes of Israel, Reuben, Gad and the half tribe of Manasseh, made an unexpected request (32:1-5). Reasoning the land on the east side of Jordan was fertile, and could support their livestock, they entreated for Moses to assign them their portion before crossing the Jordan River.

Moses’ response to their request was swift and direct, fearing those tribes were deserting the nation and would refuse to join the conquest of the land the LORD had promised Israel (32:6-15).

Reuben, Gad and the half tribe of Manasseh answered Moses’ concern with assurances. They would go to war beside their brethren and then return to the grassy pastures on the east side of the Jordan after the battles in the Promised Land were ended (32:16-42).

Reuben, Gad and the half tribe of Manasseh fulfilled their obligation to go to war (Joshua 22:1-4); however, their decision to return to the east side of Jordan made their families vulnerable when enemies made war against Israel.

They were convinced the land shy of the Promised Land was good enough; however, that decision would become a great sorrow for their children.   Reuben, Gad and the half tribe of Manasseh were the first to turn from the LORD and be taken captive by Assyria (1 Chronicles 5:26).

Lesson – Half-way, half-hearted service for the LORD is unacceptable.