The opening phrase of today’s Scripture (11:1) appears contradictory to the enormity of events that were about to unfold in David’s life. His choices and consequences would forever change his future.

“Came to pass” is an apt description of the passing of life. No one knows what a day may bring forth, but each day presents us with an array of choices and their consequences that inevitably leave their mark on our existence.

If it were possible, we would readily strike this tragic moment from David’s life. What sin! What sorrow! But 2 Samuel 11 is a startling reminder to each one of us, of who we might become if we fail to consciously abide in the presence of the LORD and remember He sees and knows all.

We have followed the king from his humble start as a youthful shepherd, rejoiced when he slew the Philistine giant, and sensed Israel’s great future when the prophet Samuel anointed him to be that nation’s next king.

We have been with David when he took to flight from King Saul and hid in the caves of the wilderness. We followed his transition from boyhood to manhood. We rejoiced with his string of victories in 2 Samuel 10 as the fugitive of Israel became that nation’s warrior king, for “the LORD preserved David whithersoever he went” (1 Chronicles 18:13b).

All Israel celebrated David’s conquests in 2 Samuel 10; however, 2 Samuel 11 introduces an observation that is sadly, a forewarning of tragedy about to befall David. We read, “at the time when kings go forth to battle…David tarried still at Jerusalem” (11:1).

David is at least fifty years old and has faithfully served as king for twenty years.  His name has been a common household word in Israel since slaying Goliath, and his exploits on the battlefield inspired songs that celebrated his valor (1 Samuel 18:7). David, however, was but a man. We should take a lesson from his life that will serve as a warning to all:

Grave consequences inevitably befall the man who underestimates the sinful bent of his nature (Psalm 51:5).

Disobeying the law (Deuteronomy 17:16-17), David had given rein to the pleasures of the flesh and taken to himself “more concubines and wives” (2 Samuel 5:13). He had foolishly indulged in carnal pleasures and neglected his duty to the nation.

David was at the pinnacle of his success, enjoying God’s blessings, and Israel was strong and prosperous. However, we find David lounging on his bed when he should have been with his men on the battlefield (11:2).

The king’s idleness and lack of accountability became the catalyst for a tragic series of wicked decisions that would forever scar his life, family, and reign (2 Samuel 11:3-15).

How far will a “man after God’s own heart” fall?

David attempted to maintain a facade of routine for nearly a year as he sat on his throne conducting the affairs of state.  On the outside, things might have appeared as usual; however, David was conscious of God’s displeasure and would later write:

Psalm 32:3-4 – “When I kept silence, my bones waxed old through my roaring all the day long.  [4]For day and night thy hand was heavy upon me: my moisture is turned into the drought of summer.” 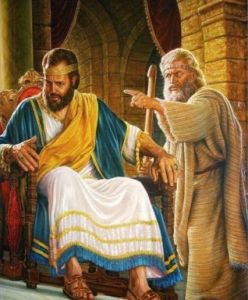 In His timing, God sent a man of courage and integrity to speak to the king. Evidencing both wisdom and caution, the prophet Nathan approached David with a story that contrasted a rich man’s abuse of a poor man (12:1-6). Intrigued by the story and incited to anger, David passed sentence against the rich man, proclaiming, “As the LORD liveth, the man that hath done this thing shall surely die: 6 And he shall restore the lamb fourfold, because he did this thing, and because he had no pity” (12:5b-6).

Having pronounced sentence, David and his attendants fell silent when Nathan raised his voice and boldly confronted the king, saying, “Thou art the man” (12:7).

David’s heart was smitten with conviction for he was indeed the man: adulterer; murderer; hypocrite and a wretched, miserable soul (12:8-12). His heart was convicted, and his proud, hypocritical façade crushed (12:13). David realized the sorrow his sin would bring on his family (12:15-17).  The king prayed,

Psalm 51:3-4 – For I acknowledge my transgressions: and my sin is ever before me.  [4] Against thee, thee only, have I sinned, and done this evil in thy sight: that thou mightest be justified when thou speakest, and be clear when thou judgest.

I close inviting you to turn the spotlight of truth and focus it on your heart and life.

First, a warning: Realize the danger of idleness and the tragedy when one trifles with sin and temptation. I challenge you, “Flee also youthful lusts” before it is too late (2 Timothy 2:22)!

Second, a reminder: Solomon warned his son, “He that covereth his sins shall not prosper” (Proverbs 28:13a).  When it comes to sin, the question is not “if,” but “when” the consequences of secret sins will befall you.

Third, a blessed promise: “Whoso confesseth [sins] and forsaketh them [sins] shall have mercy” (Proverbs 28:13b).