Our previous devotional, 2 Samuel 11-12 and 1 Chronicles 20, is the background for two penitent psalms in today’s Scripture reading (Psalm 32 and Psalm 51). Today’s devotional commentary is focused on Psalm 51. 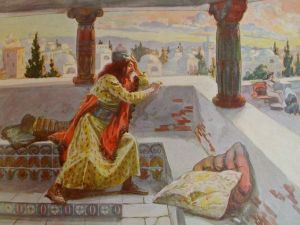 Psalm 51 is a prayer of brokenness, confession, repentance and a plea for forgiveness and restoration. The prophet Nathan’s dramatic confrontation with David (2 Samuel 12:7-13)  had exposed his adultery with Bathsheba, the wife of Uriah, one of David’s mighty men. Added to the disgrace was the king’s attempt to conceal his sin that ultimately ended in the king’s directing Uriah’s death.

It is frightening to consider the depths of sin into which a man or woman might descend. At the zenith of success and power, the words of the prophet Nathan had echoed in the palace and resonated in David’s soul: “Thou art the man!”  (2 Samuel 12:7)

One should ponder how a man like David was befallen by sin. Considering the disgraced king, we can scarce remember the innocent shepherd or the young king humbled by the adulation of his nation. He has dishonored his crown and the servants of his kingdom revile him in private whispering, “adulterer” and “murderer.”

David acknowledged the nature and curse of hereditary sin, confessing, “I was shapen in iniquity: and in sin did my mother conceive me” (Psalm 51:5). The disposition to sin is bound in the heart of all men and women, for “there is none righteous, no, not one” (Romans 3:10).

While I am dismayed by the depths of sin to which David descended, it is the length of time he tolerated the burden of such sins while acting as judge in other men’s affairs that surprises me. How long might David have continued his charade if it were not for God’s deploying his prophet to confront the king on his throne? 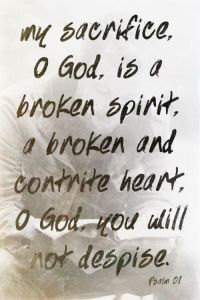 “Thou art the man!” (2 Samuel 12:7) echoed in the judgment hall and resonated in David’s heart who cried out to God for mercy and forgiveness (Psalm 51:1).  David prayed, “Wash me throughly,” because his heart and hands were dirty with his transgressions (51:2-3). He had sinned against many, but was acutely aware his foremost sin was against the LORD. The king prayed, “Against thee, thee only, have I sinned, and done this evil in thy sight” (51:4).

David continued, “Create in me a clean heart, O God; and renew a right spirit within me…12  Restore unto me the joy of thy salvation; and uphold me with thy free spirit” (51:10, 12).

No more pretense. No more hypocrisy. No more vain worship. The king confessed, “For thou desirest not sacrifice…17  The sacrifices of God are a broken spirit: a broken and a contrite heart” (51:16a, 17a). 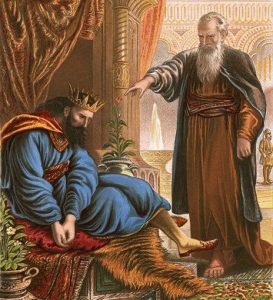 The first, he entertained lusts that inevitably led to a neglect of his duties and responsibilities as husband, father and king.

The second factor, his role as king had insulated him to accountability. His moral failure occurred when he was alone, far from the battlefield and separated from his wives and children.

Finally, though he was a man with a heart for God, he was nonetheless too proud to confess his sin (2 Samuel 11:6-22) and accept the consequences of his moral failures.

Lesson: If you are hiding sin, be forewarned: You are living on borrowed time. Be assured, the consequences of secret sins will inevitably catch up with you and your loved ones (Galatians 6:8; Psalm 32:3-4).

Invitation: The LORD is waiting to hear you pray, “Create in me a clean heart, O God…Restore unto me the joy of thy salvation” (Psalm 51:10a, 12a).