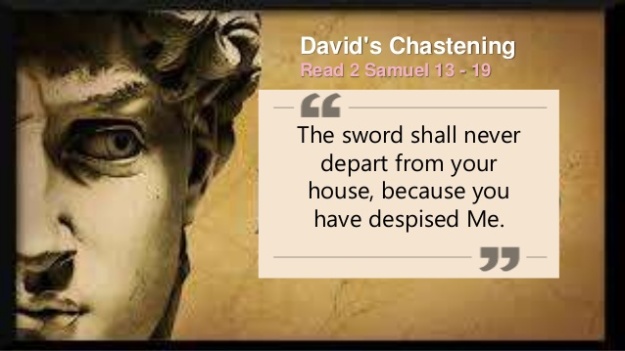 Receiving news of his son’s death, David was overwhelmed with grief. David’s mighty men had been victorious in battle and his throne had been secured, but not without great cost to the king and the nation. David’s wails of grief were haunting, “O my son Absalom, O Absalom, my son, my son!”  (19:4)

General Joab rebuked the king and reminded him how Absalom had brought shame and sorrow upon him and the nation (19:1-6).  Heeding Joab’s counsel (19:7-8), David laid aside his anguish and sat in the gate where he could greet the people and call on the nation to unite and bring him back to Jerusalem as their king (19:9-15).

Mephibosheth, son of Jonathan and grandson of King Saul, knowing his servant had given David an impression he was disloyal and supported the uprising, sought an audience with the king to declare his loyalty (19:24-30).

David also honored the men who had come to his aid in the midst of the uprising (19:31-40).  Although he was returning to his kingdom, all was not well in Israel (19:41-43).  David’s return to Jerusalem was attended by strife that arose between Judah and the other tribes in Israel (the northern ten tribes are described as “men of Israel” – 19:41).

Nathan’s prophecy that the sword would never depart from David’s household (2 Samuel 12:9-12) continues to be fulfilled and will haunt David the rest of his life. While the royal tribe of Judah readily embraced David’s return to the throne, there was a wicked man named Sheba, a son of the tribe of Benjamin, who opposed David (2 Samuel 20:1-4).  Because Saul, Israel’s first king was a Benjaminite, there was an animosity that tribe held toward David.

Sheba soon enlisted thousands of men who were willing to join him in resistance to David (20:4-13).  David acted swiftly. Realizing the fragile nature of his return to the throne, the rebellion was put down and the conflict ended with Sheba being beheaded (20:22).

Suffering three years of famine, the LORD revealed to David there would not be a healing of the land until he righted a wrong committed by his predecessor, king Saul against the Gibeonites (non-Israelites who lived in Canaan – 21:1-14).

David set right the wrong committed against the Gibeonites, capturing seven men of Saul’s lineage, and turning them over to the Gibeonites who put to death by hanging.