My apology for a late post of today’s devotional commentary. My computer began failing on Wednesday. Regrettably, I purchased a new laptop to replace my old one that was nearly six years old. To quote an old Persian adage, “this too shall pass!”

1 Kings 8 – Dedication of the Temple

We have followed the building of the Temple from its inception in the heart of King David, to its construction fulfilled during the reign of his son, Solomon. The Temple having been completed, and all the necessary implements and utensils readied, the day for dedicating the Temple came. 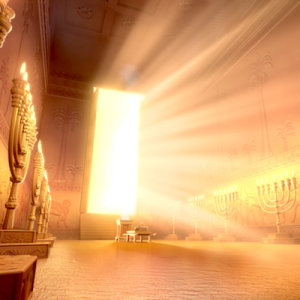 After the furnishings were placed in the Temple, the Ark of the Covenant was carried up by the priests from David’s palace complex (8:1-4). With sacrifices so great they could not be numbered, the Ark was placed in the oracle, meaning the inner sanctuary of the Temple we identify as the “Holy of Holies” (8:5-6) and sat beneath the wings of the great cherubims that resided in the holy place (8:7-8). With the passing of centuries, all that remained in the Ark was the treasured tablets upon which God had written His Commandments (8:9).

Because the God of Heaven is a Holy, glorious God with whom mortal man dare not trifle.  His glory is “like devouring fire” (Exodus 24:17). He is “a consuming fire” (Deuteronomy 4:24). God’s presence was so powerful and convicting that the priests “could not stand to minister” (8:11a). 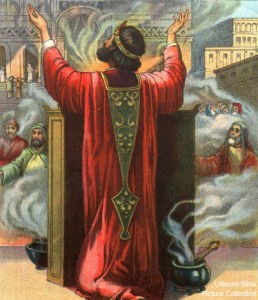 The dedication of the Temple continued with Solomon rehearsing how his father had longed to build the Temple, but was forbidden by God, and how that privilege passed to David’s son (8:12-21).  In the sight of all the people, Solomon offered a prayer of thanksgiving, remembering God’s faithfulness to His covenant promises and praying for the nation (8:22-30).

Knowing the justice of God, Solomon confessed the bent of man’s sinful heart to depart from the Law and Commandments (8:31-32). Solomon prayed that when Israel sinned as a nation, that the LORD would not forsake His people, but would hear their confession, and upon their repentance, would forgive their sin (8:33-36).

Knowing troubles would befall the nation (example, famine arising from physical disasters and blights), Solomon prayed that the LORD would hear the prayers of every man (8:37-43).  Should the people go to war and fall captive, the king prayed the LORD would hear the prayers of His people and restore them to their homeland (8:44-50). Remember the mercies of God in the past, Solomon concluded his prayer by reminding the LORD how He had chosen Israel and brought the people out of Egypt under Moses (8:51-53).

The dedication of the Temple being ended, Solomon blessed the people and led a celebration with sacrifices and offerings that continued fourteen days (8:54-66).

2 Chronicles 5 adds an additional element to the celebration that demonstrates the prominence of music in the worship of the LORD (5:12-13).

While we will not see the visible presence of the LORD’S glory in a cloud in today’s sanctuaries, it is my prayer that we would be so conscious of the LORD in our worship that we cannot but reverence and glorify Him.