Our Scripture reading is five chapters long, but I will limit today’s devotional commentary to 2 Chronicles 19-20.

With Ahab, king of Israel, slain in his battle with Syria, his ally King Jehoshaphat returned to his palace in Jerusalem where he was confronted by Jehu, the son of Hanani whom Asa had imprisoned (19:1-2).

With the boldness of a prophet of the LORD, Jehu condemned the king’s alliance with Ahab saying, “Shouldest thou help the ungodly, and love them that hate the LORD? therefore is wrath upon thee from before the LORD” (19:2).

In spite of Jehoshaphat’s inappropriate alliance with the late king of Israel, Jehu comforted the king with God’s promise of grace saying, “there are good things found in thee…and hast prepared thine heart to seek God” (19:3).

Jehoshaphat set his heart to lead Judah in the way of the LORD and set judges in the land to rule in difficult matters (19:4-11) and admonishing them, “Take heed what ye do: for ye judge not for man, but for the LORD, who is with you in the judgment” (19:6).

Near the latter years of his reign, Jehoshaphat received word that a confederacy of enemies was gathering to wage war against Judah (20:1-2).  Fearing the size of the armies aligned against Judah, Jehoshaphat “set himself to seek the LORD, and proclaimed a fast throughout all Judah (20:3). The people gathered in Jerusalem and joined their king before the Temple where he called upon the LORD (20:4).

King Jehoshaphat, standing in the midst of his people, rehearsed in his prayer God’s covenant promises to Israel and how the LORD had promised the land “to the seed of Abraham thy friend for ever” (20:5-7).

What a stirring prayer! What an inspiring scene! As Judah’s King called upon the LORD and confessed he was powerless to face such a great foe (20:12), “all Judah stood before the LORD, with their little ones, their wives, and their children” (20:13).

God heard Jehoshaphat’s prayer and sent Jahaziel to prophecy and encourage the king and Judah saying, “Thus saith the LORD unto you, Be not afraid nor dismayed by reason of this great multitude; for the battle is not yours, but God’s” (20:15).

With God’s assurance, the people went to the battlefield and found their enemies had turned and destroyed one another (20:22-23).  Without lifting a sword or spear, the LORD gave Judah victory and the spoils of war were so great it took three days to gather them (20:24-25).

When neighboring kingdoms heard the news of Judah’s victory and how the LORD had fought against their enemies, “the fear of God was on all the kingdoms” (20:29). 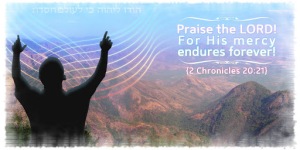 While there are many lessons we might take from today’s Scripture reading, perhaps the most principal one is that the LORD wants us to call upon Him in times of trouble, trials and sickness.

When we are afraid, call upon the LORD.  When enemies threaten us and we feel overwhelmed, remember, “the eyes of the LORD run to and fro throughout the whole earth, to shew himself strong in the behalf of them whose heart is perfect toward him” (2 Chronicles 16:9).