2 Kings 14, and 2 Chronicles 25 are records of the same historical events: The reigns of Joash, king of Israel, and Amaziah, king of Judah.

I remind you that Joash, the father of Amaziah, became king as a seven-year-old boy and had been guided by the godly counsel of the high priest Jehoiada (2 Chronicles 24).  During Joash’s reign, Judah had experienced a spiritual renaissance and the kingdom prospered until Jehoiada died (24:15), and Joash heeded the counsel of wicked men.

Someone has observed the path of sin will always take you further than you ever planned to go, and so it was with Joash. He forgot the kindness of his lifelong friend, the chief priest Jehoiada (24:22), and eventually fell in with those men who stoned to death the prophet Zechariah, the son of Jehoiada (24:20-22). Tragically, Joash’s reign ended when he was assassinated by his servants who avenged the slaying of Zechariah (24:24-26).

It is that last phrase, “but not with a perfect heart” (25:2), that will shadow the life and reign of Amaziah.  Amaziah exacted justice for his father’s assassination, killing those who murdered his father; however, unlike other kings, he did not prevail upon the families of the assassins, and spared the lives of their sons and daughters according to the law (Deuteronomy 24:16).

Amaziah organized his army in preparation for war with Edom (descendants of Esua, who lived on the east side of the Dead Sea); however, he foolishly hired mercenary soldiers out of Israel (25:6). When God sent a prophet to warn Amaziah that hiring idol worshipping mercenaries from Israel was not the will of God (25:7), the king heeded the warning and sent the soldiers of Israel home (25:10).

As Amaziah led his army into what would be a glorious victory over Edom, the mercenary soldiers from Israel, for the slight of not going to war and taking the spoils of battle, turned and attacked cities along the border of Judah (25:13). 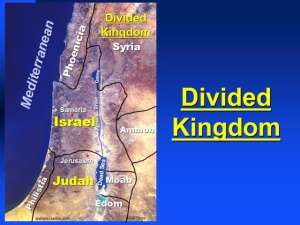 Remembering Amaziah was a man who lacked “a perfect heart” for the LORD, we read he committed idolatry (25:14) following his victory over Edom and foolishly worshipped the idols of Edom! The LORD sent a prophet who warned the king he had provoked God’s wrath for foolishly worshipping the gods of the very people he had defeated (25:15-16). His heart lifted up with pride, Amaziah rejected the prophet’s admonition and threatened to kill him (25:16).

Fresh off his victory over Edom, Amaziah initiated a call to war against Joash, king of Israel. Joash warned Amaziah to not meddle in the affairs of Israel (25:17-19). Blinded by pride and heeding the counsel of his peers (25:17), Amaziah, went to war and was defeated by Joash who took him prisoner (25:21-23).

With King Amaziah as his prisoner, Joash broke down the northern wall of Jerusalem and plundered the treasuries of the palace and the Temple (25:21-24).

I close with a principle concerning the sovereignty of the LORD.

Sinful pride distorts the thoughts within man, and Amaziah deluded by victory, refused to heed the warning sent to him in a fable by Joash, king of Israel (25:18-20). We read, “Amaziah would not hear; for it came of God” (25:20). 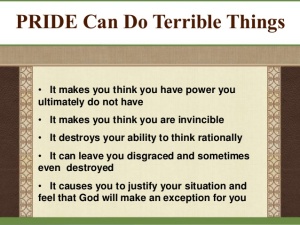 Amaziah refused the prophet’s warning and rejected the caution of Israel’s king. The king’s pride led to Judah’s humiliating defeat, the disgrace of being taken prisoner, the eventual plundering of the Temple, and pilfering of the palace treasuries (25:21-23). The king suffered his final humiliation when his servants conspired to slay him (25:28).

Warning: Pride distorts a man’s thinking, blinds him to his faults, and invariably brings him to ruin. In the words of Solomon: