We continue our Scripture reading in the Book of Isaiah with Israel, the northern ten tribes having fallen to Assyria and its armies now threatening Judah. 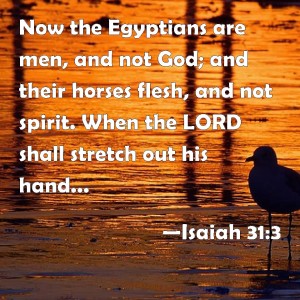 King Hezekiah’s attempt to appease Assyria’s king with gold and silver had failed. Receiving news of the fall of Samaria and the inhabitants of Israel taken captive, the king of Judah sent emissaries to Egypt to seek an alliance against Assyria (31:1). Isaiah condemned the king for his failure to turn to the LORD for help and declared, “Now the Egyptians are men, and not God; and their horses flesh, and not spirit” (31:3).

In spite of the king’s failure to turn to God, the LORD promised He would “come down to fight for mount Zion” (31:4b) and “the LORD of hosts (would) defend Jerusalem” and “preserve it” (31:5). Isaiah called on the people to repent of their sins (31:6-7), and promised the LORD would come to their defense and “then shall the Assyrian fall with the sword” (31:8).

Isaiah 32 opens with a yet to be fulfilled promise of the coming of the Messiah who “shall reign in righteousness” (32:1). Who is the Messiah who will reign as King? Nathanael confessed that Jesus Christ is “the Son of God…the King of Israel” (John 1:49).

Jesus promised His followers He would come again (John 14:1-6) and the angels who were at His ascension promised His disciples, “this same Jesus, which is taken up from you into heaven, shall so come in like manner as ye have seen him go into heaven” (Acts 1:11).

When Jesus Christ comes again, He will come as a conquering King and will sit in judgment over the nations of the earth. The apostle John wrote, “Behold, he cometh with clouds; and every eye shall see him, and they also which pierced him: and all kindreds of the earth shall wail because of him. Even so, Amen” (Revelation 1:7). 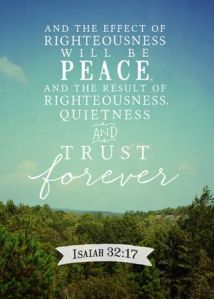 When Christ sits on His throne in Jerusalem the curse of sin that blights and scars the earth will be removed. The eyes of the blind will see, the deaf will hear, and stammering tongues will speak (32:3-4). The barren wilderness will become a fruitful garden (32:15). There will be righteous judgment in the land (32:16), and because righteousness rules, there will be “peace…quietness and assurance for ever” (32:17).

What a contrast to our world where there is no justice in the land. Where rioting and violence, sickness and death are perpetual threats.

Isaiah 33 picks up the story of King Hezekiah’s failed attempt to appease Assyria, but the prophet warned that the destroyer (Assyria) would itself be destroyed (33:1).

Though the majority of Judah had rebelled and turned from the LORD, there were a few in Judah who prayed and God heard their prayers. The faithful few prayed, “O LORD, be gracious unto us; we have waited for thee: be thou their arm every morning, our salvation also in the time of trouble” (33:2). God answered their prayers and promised to deliver Jerusalem by setting Himself against Assyria (33:10-12).

God fulfilled His promise of judgment and destroyed Assyria’s army. The defeat of Judah’s adversary was so complete that it struck fear in the hearts of the people (33:13-14). 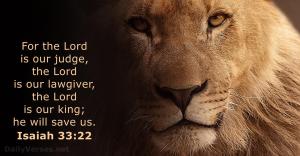 A Messianic prophecy of Christ’s Second Coming is found in the closing verses of Isaiah 33. When Christ returns He will repel and destroy the armies of the nations of the earth that will be gathered against Jerusalem (33:17-24).

In the “New Jerusalem” where Christ will reign, there will be no sickness or sin (33:24).

Isaiah 34 speaks of God’s great and universal judgment of the nations of the world.

Isaiah 34 focuses on the “Day of the Lord’s Vengeance,” His final judgment of the nations of the world (34:8).

The nations of the world will be assembled (we know prophetically that this is the Battle of Armageddon, Revelation 19:11-21). Isaiah describes how God will pour out His wrath on the nations for how they mistreated and slaughtered His people (34:1-2). No nation will be spared the wrath of the LORD, and the earth and the heavens will be moved by God’s judgment (34:3-4).

The immediate focus of Isaiah’s prophecy was Edom (or Idumea) and its capital city “Bozrah” (34:6). Edom served as an example of what will become of the nations, when God takes vengeance on the world.

Isaiah warned all the prophecies of the LORD would come to pass and “no one of these shall fail” (34:16).