We continue our chronological schedule through the Word of God, concluding our journey in the book of Jeremiah with today’s Scripture reading, Jeremiah 51-52. We have followed the ministry of Jeremiah as he preached to Judah, a nation on the brink of God’s judgment. Israel is no more. Judah has fallen; the Temple is destroyed, and the city of Jerusalem has been left desolate. God, however, had not forgotten or forsaken His people. Babylon’s invasion of Judah had left a path of suffering and destruction, but Jeremiah prophesied that the LORD would have His revenge against Babylon for its abuses of His people.

Jeremiah 51 – The Vengeance of God: Babylon the Great is Fallen

Jeremiah began his prophecy against Babylon in chapter 50, and continues foretelling that nation’s precipitous fall in chapter 51.

Jeremiah had prophesied a coalition of nations that would come against Babylon, “an assembly of great nations from the north country” (50:9). Babylon would “be a spoil” (50:10), “a desolation among the nations” (50:23). God had not forgotten how Nebuchadnezzar had destroyed His Temple in Jerusalem, and the LORD declared “the vengeance of His Temple” (50:28).

God’s people would be made to dwell in Babylon for seventy years of captivity; however, Jeremiah prophesied, “Israel hath not been forsaken, nor Judah of his God, of the LORD of hosts; though their land was filled with sin against the Holy One of Israel” (51:5).

Who is the LORD that moved the nations of the earth to do His bidding? He is the Creator, who “made the earth by his power, he hath established the world by his wisdom, and hath stretched out the heaven by his understanding” (51:15).

Though the most powerful nation in its day, the fall of Babylon would be swift and severe and no man, woman, or child would be spared (51:20-24). The cruelties Babylon afflicted on Jerusalem, her own citizens would experience (51:25). The “king of the Medes” (Cyrus who led a coalition of the Medes and Persians) was foretold to fulfill the LORD’S purpose, and “make the land of Babylon a desolation without an inhabitant” (51:29). What Babylon had sown, she would reap (51:34-35).

Jeremiah wrote his prophecies in a scroll (a book) and sent them by a scribe who was commanded to read the prophecies against Babylon in the streets of that great city (51:59-62). When Seraiah, the scribe, had read all the prophecies against Babylon, he was told to tie a stone around the book and “cast it into the midst of Euphrates” (51:63) saying: “Thus shall Babylon sink, and shall not rise from the evil that I will bring upon her” (51:64). 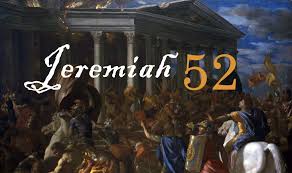 Jeremiah 52 – When All Seemed Lost, A Glimmer of Hope

Jeremiah 52 returns us to the reign of Zedekiah, king of Judah, and his rebellion not only against Nebuchadnezzar, king of Babylon (Jeremiah 37:1-10), but also against the LORD. Jeremiah had urged Zedekiah to accept Babylon’s reign over Judah, warning to rebel would mean Jerusalem would be destroyed and the people led away captive (Jeremiah 38). 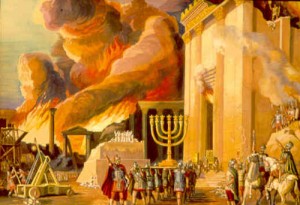 When Zedekiah’s attempt to seek an alliance with Egypt failed, the king of Judah realized all was lost. Fleeing Jerusalem with a small entourage of soldiers (52:7), Zedekiah was overtaken by Nebuchadnezzar’s soldiers near Jericho (52:8). The king of Judah and his sons were taken to Nebuchadnezzar who ordered Zedekiah’s sons slain, the king’s eyes put out (52:9-10), and him to Babylon in chains (52:11).

Jeremiah’s prophecies conclude noting that Nebuchadnezzar had led three sieges against Jerusalem and a total of four thousand six hundred citizens of Judah had been taken captive to Babylon (52:28-30). 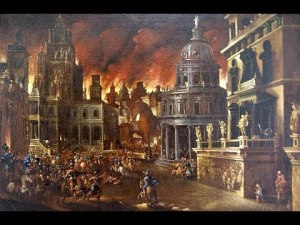 Reminding God’s people that all was not lost, thirty-seven years after Jerusalem was destroyed, Jehoiachin, the king of Judah who was held captive in Babylon, found favor in the eyes of Evilmerodach, the son of Nebuchadnezzar, and was raised up from prison to dine at the king’s table the rest of his days (52:31-34).