Daniel 10-12 is the fourth and final vision of Daniel. Daniel 10 introduces the vision. Daniel 11:1-35 revealed the immediate future, while Daniel 11:36-12:4 was a revelation of the distant future and a time we know as the Tribulation: “the time of the end” (11:36) in which the antichrist will appear. Daniel’s final vision concludes with a revelation of the Great White Throne (12:4-13) and God’s final judgment.

Today’s devotional commentary will focus on Daniel 10 and the introduction of the final vision. 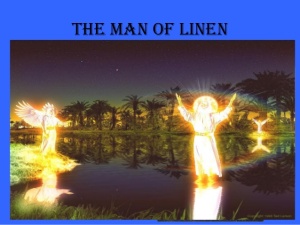 Writing in the third person, Daniel employs his Chaldean name Belteshazzar (no doubt the name he employed in his official capacity as an officer of the king’s court), and revealed a transition of leadership in Babylon citing the time of his fourth and final vision as, “the third year of Cyrus king of Persia” (10:1).

The date of the vision was about 536 B.C., about the time of Daniel’s experience in the Lion’s Den (Daniel 6) and soon after King Cyrus had issued his edict, freeing the Jews to return to their homeland and rebuild the Temple (Ezra 1). Fifty thousand captives had returned to Israel, but soon after their arrival they faced opposition that not only hindered the work on the Temple, but finally succeeded in stopping it altogether.

Daniel, serving as an official in the Persian court, must have been privy to the opposition his brethren were facing in Israel and that may have been the cause for his “mourning three full weeks” (10:2). Daniel fasted and prayed for three weeks, and about the time of the Passover, “in the four and twentieth day of the first month” (10:4), God sent a messenger to Daniel as he “was by the side of the great river, which is Hiddekel” (the Tigris River, 10:4).

The messenger, described as “a certain man” (10:5), was so brilliant in appearance (10:5-6) that Daniel and his companions were terrified, though only Daniel saw the vision (10:7). With a voice that sounded “like the voice of a multitude” (10:6) and was accompanied by a great earthquake, Daniel’s companions fled (10:7), leaving Daniel alone to see the “great vision” (10:8).

Though the man in Daniel’s vision was not identified, I am of the opinion he was a pre-incarnate appearance of the LORD Jesus Christ.  The prophet was so overwhelmed by the heavenly presence of the man, that he felt himself to be utterly corrupt and physically weak (10:8). Lying prostrate before the man and his face to the ground, the voice and words of Daniel’s visitor brought on a “deep sleep” (10:9).

Daniel 10:10-21 – Revelation of an Unseen Spiritual Battle: The Angels of the LORD vs. The Demons of Darkness 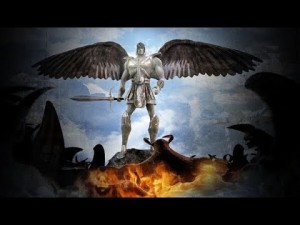 Daniel was suddenly awakened when a hand touched him, lifting him up on his knees and the palms of his hands (10:10). The hand of this second visitor is not identified; however, he was an angel and might have been the angel Gabriel who had appeared twice before in Daniel 8:16 and Daniel 9:21. Comforting the prophet with his salutation, “O Daniel, a man greatly beloved, understand the words that I speak unto thee, and stand upright: for unto thee am I now sent” (10:11a), Daniel stood to his feet still trembling (10:11b).

Daniel 10:12-21 gives us a great insight into an invisible spiritual conflict between the LORD and His angels, and Satan and his demons of darkness.  The angel informed Daniel that he had been sent by the LORD on the first day when he had prayed (10:2-3, 12); however, he had been hindered in his mission by “the prince of the kingdom of Persia” who had resisted him twenty-one days until Michael the archangel had come to assist him (10:13).

The angel stated the purpose of his mission in coming to Daniel saying, “I am come to make thee understand what shall befall thy people [the believing Jews] in the latter days [the time of tribulation]: for yet the vision is for many days” (10:14). Hearing the news of what would become of God’s people at the end of the ages, Daniel once again fell to the ground, dumbstruck and deeply troubled by the vision (10:15-17). Strengthened by the touch and encouraging words of his angelic visitor (10:16, 18-19), Daniel was ready to receive the prophecy that would follow (Daniel 11-12).

I close inviting you to consider the revelation of an invisible, spiritual warfare that is being waged by the angels of heaven against the demonic angels (10:20). Two great and wicked fallen angels are identified as “the prince of Persia,” and one who will follow him, “the prince of Grecia” (10:20b).

The next time you pray and grow anxious waiting on the LORD to answer your prayer, remember: There is an evil host of angels that are actively opposing God’s work on earth. They influence and possess men and women in the great halls of government, wield power for evil in society, and are ever encouraging wicked men and women to oppose God and commit evil against His people. 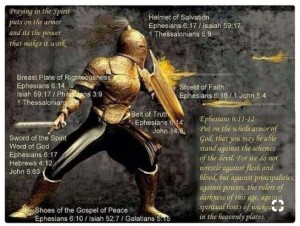 Ephesians 6:11-12 – 11  Put on the whole armour of God, that ye may be able to stand against the wiles of the devil. 12  For we wrestle not against flesh and blood, but against principalities, against powers, against the rulers of the darkness of this world, against spiritual wickedness in high places.