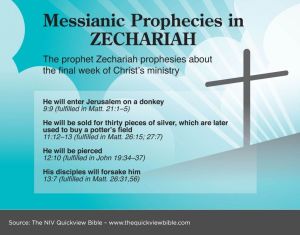 Today’s Bible reading concludes our study of the Book of Zechariah, the prophet to the post-exilic people of the Babylonian captivity. Of the Twelve Tribes of Israel, only Judah and Benjamin had returned to Judah following the edict of Cyrus, king of Persia (Ezra 1).

Though he began his ministry as a young prophet, and was a contemporary of Haggai, Zechariah was nevertheless a bold prophet who did not shy from his calling. Whether confronting the sins of his people and calling them to repentance, or assuring them with the prophecies and promises of a coming Messiah, Zechariah was faithful and true to the Word of the LORD.

As we have seen, Zechariah was privileged with foretelling some of the great Messianic prophecies found in the Old Testament Scriptures and fulfilled by Jesus Christ in His first coming. For today’s devotional commentary, I invite you to consider Zechariah’s prophecies in light of the Messiah King, Jesus Christ.

Zechariah 9:9 – Rejoice greatly, O daughter of Zion; Shout, O daughter of Jerusalem: Behold, thy King cometh unto thee: He is just, and having salvation; Lowly, and riding upon an ass, And upon a colt the foal of an ass.

Zechariah 11:12-13 – And I said unto them, If ye think good, give me my price; and if not, forbear. So they weighed for my price thirty pieces of silver. 13 And the Lord said unto me, Cast it unto the potter: a goodly price that I was prised [i.e. prized or appraised] at of them. And I took the thirty pieces of silver, and cast them to the potter in the house of the Lord. 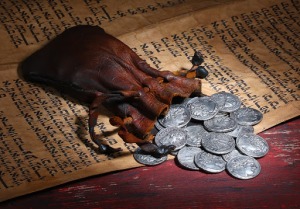 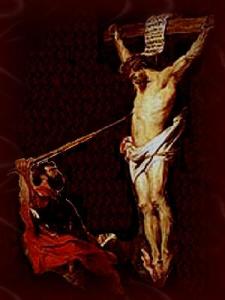 Notice that the prophecies of Zechariah were fulfilled by Jesus Christ, our Savior Redeemer, in exact detail.