Today’s Bible reading assignment consists of three chapters in three of the four Gospels, and is also the first taken from the Gospel of Mark. Having introduced you to the Gospels of Matthew, Luke, and John, it is my joy to introduce you to the Gospel penned by John Mark. 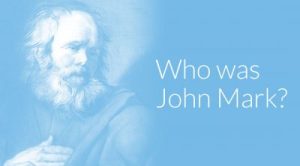 Who was John Mark?

Unlike the authors of the other Gospels who were numbered among Christ’s Twelve apostles, John Mark was not a disciple.  The Book of Acts identifies him as a citizen of Jerusalem (Acts 12:12).  Some believe he was the man whom Mark identified as “a certain young man” (Mark 14:51), who fled into the night without his robe when Jesus was arrested in the Garden (Mark 14:50-52).

Mark became a traveling companion of Barnabas and Saul (i.e. Paul) when that dynamic missionary duo set out on their first missionary journey (Acts 12:25; 13:1-5). Fortunately for us, but unfortunately for John Mark, his journey with Paul and Barnabas became a spiritual crisis and ended abruptly when we read that, “John [i.e. Mark] departing [going away; deserting] from them [Paul and Barnabas] returned [turning his back]to Jerusalem” (Acts 13:13).

The cause for John Mark’s sudden departure is not revealed. It could have been the hardships of travel; however, I believe it was the ever-present threat of persecution. John Mark reappears in Acts 15 and became a point of conflict and division between Paul and Barnabas (Acts 15:36-39). That dynamic missionary duo was preparing to depart on their second missions’ trip when we read, “Barnabas determined to take with them John, whose surname was Mark” (Acts 15:37).

Paul, however, “thought it not good [desirable] to take [John Mark], who departed from [quit; deserted]them from Pamphylia, and went not with them to the work” (15:38).  The dispute over John Mark’s company became so contentious that we read, “they departed asunder one from the other: and so Barnabas took Mark, and sailed unto Cyprus; 40And Paul chose Silas, and departed, being recommended by the brethren unto the grace of God. 41And he went through Syria and Cilicia, confirming the churches” (15:39-41).

What became of John Mark?

We do not know what transpired in John Mark’s life after he departed with Barnabas and set sail to Cyprus. We do know that he went on to distinguish himself as one of God’s faithful servants, and is the author of the Gospel of Mark! 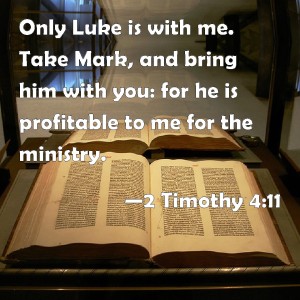 How did John Mark go from a man with whom the apostle Paul was unwilling to travel, to becoming the author of the second Gospel in our New Testament?

Paul regarded John Mark as a disappointment, however, Barnabas had looked on the young man through the eyes of a mentor, and lovingly restored Mark to ministry.  Perhaps it was this real-life lesson that moved Paul’s heart when he wrote:

Galatians 6:1-2 – “Brethren, if a man be overtaken in a fault, ye which are spiritual, restore such an one in the spirit of meekness; considering thyself, lest thou also be tempted. 2 Bear ye one another’s burdens, and so fulfil the law of Christ.”

I close with a spiritual lesson that we should take from the life of John Mark:

God restores failures and uses imperfect people to do His work. 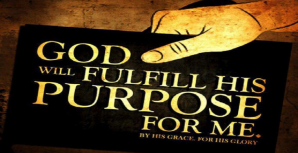 1 Corinthians 4:2 – 2Moreover it is required in stewards, that a man be found faithful.