The sin of covetousness is the malady of humanity, and is as ancient as sin itself.

When Satan tempted Eve in the Garden of Eden (Genesis 3:1-7), he proposed that she consider the fruit of the tree that God had forbidden, the “tree of knowledge of good and evil” (Genesis 2:17). Initially, Eve resisted the temptation; however, the more she considered the forbidden fruit, the more she pondered what the serpent (Satan) suggested were its benefits.

She saw that the fruit God had forbidden was “good for food,” appealing, for it was “pleasant to the eyes,” and had the prospect “to make one wise” (Genesis 3:6). Coveting what God had prohibited, Eve “took of the fruit thereof, and did eat, and gave also unto her husband with her; and he did eat. 7And the eyes of them both were opened” (Genesis 3:6-7).

Covetousness goes by many names and is evidenced in many ways: Greed, lust, discontentment, “love of money” (1 Timothy 6:10), hoarding, and stinginess are a few words and attitudes that define a sin that has driven many a man or woman to self-destruction, and eternal damnation. 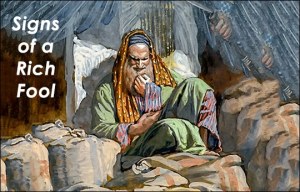 In the parable, Jesus told the story of a rich man whose “passion for possessions” could not be satisfied. Even when he was blessed and his barns were filled and overflowing, he was not content. So the rich man determined to build larger barns, boasting within himself, “Soul, thou hast much goods laid up for many years; take thine ease, eat, drink, and be merry.” (12:19). Sadly, the sum of the parable has been repeated and condemned by God since the fall of man: “Thou fool, this night thy soul shall be required of thee: then whose shall those things be, which thou hast provided?” (12:20)

What prompted this enduring illustration of covetousness? 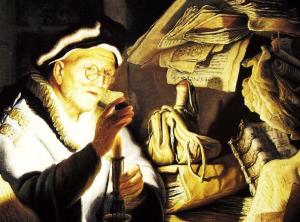 It was the request of a man whose “passion for possessions” had taken precedence over the natural affection one brother should have for another. The man had come to Jesus demanding, “Master, speak to my brother, that he divide the inheritance with me” (12:13).  The Law was clear regarding inheritance, yet this brother was discontent, demanding his inheritance out of a heart of greed and gain.

Recalling Jesus knew the hearts of all men, He recognized in the brother’s request an inordinate affection for wealth and possessions. Rebuking the man for his demand that He act as judge in a matter where the law had clearly spoken, Jesus warned: “Take heed [be quiet; i.e. listen], and beware of covetousness [i.e. greed; a desire or craving to have more]: for a man’s life consisteth [i.e. is defined by] not in the abundance [surplus; affluence] of the things which he possesseth” (12:15).

Truth: A fool treasures riches, and eventually finds himself a slave of them.

Where is your treasure?