A shepherd’s memo and invitation to those who follow the 2020 edition of www.HeartofAShepherd.com –Today’s Scripture reading is the 319th Bible reading of the year and is a milestone as we conclude our chronological study of the Gospels. 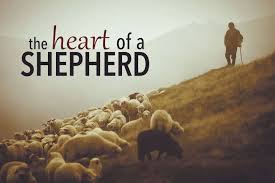 This year, 2020, brought not only a pandemic, but also unprecedented attacks on liberties I fear we too often take for granted. We have experienced an erosion of freedoms, as social mediums and news organizations joined forces to silence blogs and posts that are contrary to their social agenda and narrative. My Heart of a Shepherd’s Facebook Page was disabled without notice, and without any means of appeal.

If you have not done so, I urge you to subscribe to www.HeartofAShepherd.com, and insure you will continue to receive these daily Bible devotionals.

The proofs of Christ’s resurrection, the Great Commission, and the command to preach the Gospel are the concluding themes in our study of the Gospels.

Luke and John record undeniable proofs of Jesus’ bodily resurrection from the dead. Mary Magdalene (John 20:1), and several other women, including Joanna, and Mary the mother of James (Luke 24:1, 10) had arrived at the tomb “the first day of the week, very early in the morning (Luke 24:1) and found “the stone rolled away from the sepulchre” (Luke 24:2).

Although Jesus had on several occasions prophesied His death, burial, and resurrection, Mary Magdalene had leapt to the conclusion that the Lord’s body had been removed by His enemies (John 20:1-2). Without waiting on the other women, Mary bolted from the tomb, taking news to Peter and John saying, “They have taken away the Lord out of the sepulchre, and we know not where they have laid him” (20:2).

The other women had entered the tomb, and were frightened by the appearance of “two men,” two angels who “stood by them in shining garments” (Luke 24:4) and asked, “Why seek ye the living among the dead?” (24:5)

Without waiting for the women to answer, the angels reminded them how Jesus had foretold His death, burial and resurrection, “7 Saying, The Son of man must be delivered into the hands of sinful men, and be crucified, and the third day rise again” (Luke 24:7). 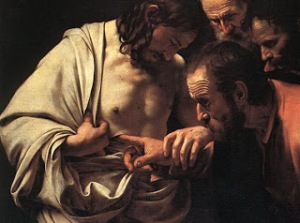 Those women, remembered “His words,” and with joy left the tomb and ran to tell the disciples the news that Jesus was risen. The disciples, however, “believed them not” (Luke 24:11). That “same day at evening,” being “the first day of the week” (John 20:19), Jesus appeared to His disciples and said to them, “Peace be unto you” (20:19).

Proving His bodily resurrection from the dead, Jesus showed the disciples the physical scars of His crucifixion, in both “His hands and His side” (John 20:20). Thomas, one of the Twelve, was not there when Jesus revealed himself, and expressed his unbelief saying, “Except I shall see in his hands the print of the nails, and put my finger into the print of the nails, and thrust my hand into his side, I will not believe” (20:25).

Eight days later, Jesus appeared a second time to His disciples (John 20:26), and said to Thomas, “Reach hither thy finger, and behold my hands; and reach hither thy hand, and thrust it into my side: and be not faithless, but believing” (20:27). Thomas, laying aside his unbelief, confessed his faith in Christ saying, “My Lord and my God” (20:28).

Jesus was more than a prophet, or a great teacher. No mortal man could die and be raised from the dead apart from God. The days that followed Christ’s bodily resurrection, and the signs and miracles He performed (20:30), enflamed the hearts of His followers to preach the Gospel of Jesus Christ’s death, burial, and resurrection with boldness and power.

John writes, “31 But these are written, that ye might believe that Jesus is the Christ, the Son of God; and that believing ye might have life through his name” (20:31).

What do you believe? Do you believe the revelations of the written Word of God? Do you believe Jesus Christ was crucified for your sins, and on the third day was raised victorious from the dead? John wrote later in life his unwavering confidence in Christ: