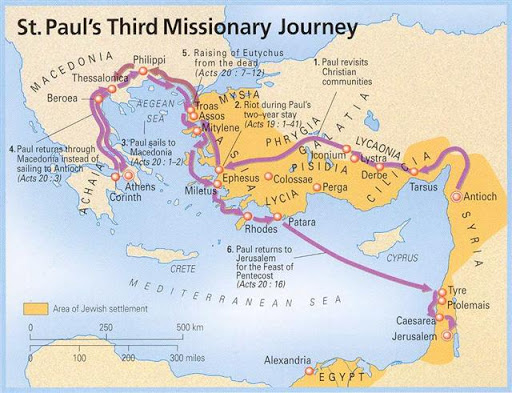 Our chronological Scripture reading returns to the Acts of the Apostles, chapters 20-23, when, once again, we examine Luke’s record of the apostle Paul’s missionary journeys. Since we were last in the Book of Acts, we have been privileged to consider Paul’s epistles to believers in both Corinth and Rome in our daily readings. 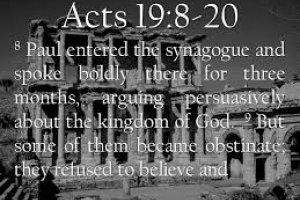 Acts 20 picks up the narrative of Paul’s ministry in Ephesus (Acts 19:1-41) where Paul had spent two years ministering (19:10a). The influence of the apostle’s preaching had spread throughout Asia, and both “Jews and Greeks” had received “the word of the Lord Jesus” (19:10b). Paul’s bold condemnation of idolatry (19:26), and the powerful effect of his preaching had not only threatened the commerce and trade in the worship of the Greek goddess Diana (19:27), but also set the whole city in an uproar (19:28-41).

Paul, realizing his continued presence in Ephesus would endanger the lives of believers, determined to depart from Ephesus, and began his journey through Macedonia (a province of Rome north of Greece that we know today as the Balkan region of Europe). The apostle retraced his earlier missionary journeys, and traveling south to Greece (20:1-2), encountered Jews who were plotting against him (20:3).

God wonderfully and providentially blessed Paul with a mission’s team who accompanied him in his journey (20:4) through Asia. Among his traveling companions was Timothy, his beloved “son in the faith” (1 Timothy 1:2), who would one day become the pastor of the church in Ephesus (1 Timothy 1:3).

Realizing he would not pass-through Macedonia again, Paul came to Miletus, a seaport city about 30 miles from Ephesus (20:16), and there he sent for the elders of the church in Ephesus (20:17).

The balance of Acts 20 records Paul’s final challenge to the pastoral leadership of the church in Ephesus (20:17-38). This passage is extremely moving as we see Paul’s passion for preaching and ministry (20:17-27), his loving compassion for those to whom he ministered (20:28-32), and his example of self-sacrificing charity and service (20:33-35).

Neither time or space permit me to adequately consider the balance of today’s Scripture reading; however, I will take liberty to give my readers a quick overview of Acts 21-23.

Our next Scripture reading will follow Paul’s ministry from Caesarea by the Sea (a beautiful seaport on the Mediterranean that I have visited), and his journey by sea that will end in his imprisonment in Rome.