You might have heard someone use the term “deep waters,” in describing a topic or subject that is difficult, and challenging to grasp. I fear today’s Scripture reading might tempt many to label the passages “too deep,” and too difficult to understand (Hebrews 7-10).

Before you give up, allow me an opportunity to narrow your focus to one chapter, Hebrews 7, and attempt to make the difficult as simple as possible. First, allow me to introduce you to Melchisedec (7:1).

Melchisedec is mentioned in Genesis 14:18-20, Psalm 110:4, and Hebrews 5-7. Scholars and preachers have long debated the identity of Melchisedec; however, we know very little about him, apart from his spiritual stature in the Scriptures.

In other words, Melchisedec, who appeared as the “priest of the most high God” in Genesis 14, and preceded Jesus’ birth, death, and resurrection by 4000 year, was a type, a forerunner, a preincarnate portrait of Christ.

Hebrews 6:20 identified Jesus as “an high priest for ever after the order of Melchisedec.” While the Aaronic priesthood was hereditary, passed from father to son, the Melchisedec priesthood was established and appointed by “the most high God” (7:1).

Melchisedec was Superior to Abraham and His Seed. (7:1-7)

An illustration of Melchisedec’s superiority to Abraham, is shown by that patriarch returning from a successful battle, and with the spoils of his victory, offering the sacrifice of a tithe, “a tenth part of all” to Melchisedec (7:1, 4).

Melchisedec is also identified as the “King of righteousness, [the] King of Salem, [and the] King of peace” (7:1-2). Unlike the Levitical\Aaronic order of the priesthood that was dependent upon one’s physical heredity (7:5), Melchisedec’s priesthood was not dependent upon human lineage. He was the “priest of the most high God” (7:1), “without father, without mother, without descent, having neither beginning of days, nor end of life; but made like unto the Son of God; abideth a priest continually” (7:3). 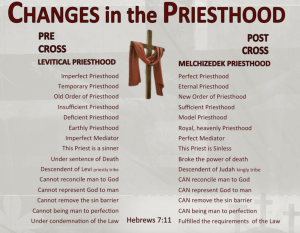 Jesus Christ is the Believer’s High Priest, After the Order of Melchisedec (7:21-28)

The Levitical priests had to continually offer daily sacrifices for their sins, and the sins of the people (7:27); however, Jesus is the perfect, sinless, perpetual high priest (7:24-28).

We who have accepted Jesus Christ’s sacrifice for our sins, do not require another priest to intercede for us. He “is able also to save [sinners] to the uttermost [wholly, completely, nothing lacking] that come unto God by him [Jesus], seeing he ever liveth to make intercession for them” (7:24-25).

He is “holy, harmless, undefiled, separate from sinners, and made higher than the heavens; 27 Who needeth not daily, as those high priests, to offer up sacrifice, first for his own sins, and then for the people’s: for this he did once, when he offered up himself” (7:26-27).

Is Jesus your high priest? He is, if He is your Savior.