Genesis 6 ended with God commanding Noah to build the Ark, while Genesis 7 begins with Noah being commanded to enter the Ark, leaving us a gap of 120 years between the two chapters. What occupied Noah’s time during those years?

God had revealed to Noah his plan to destroy the earth, and commanded him to build an Ark, giving him the design of that great ship of salvation (6:14-17). Lest there be any doubt of the extent of His judgment, God made Noah to understand that the flood would be universal, destroying “all flesh, wherein is the breath of life, from under heaven; and every thing that is in the earth shall die” (6:17).

Now God established a covenant with Noah (6:18), and his family would be saved from the flood waters being spared from God’s judgment; not because they were sinless, but because he was the object of God’s grace (6:8). Knowing He intended to restore the earth after the flood waters receded, God directed Noah to prepare to bring two “of every living thing…into the ark, to keep them alive with thee; they shall be male and female” (6:19-20), and to store “food that is eaten… food for thee, and for them” (6:21).

Genesis 6 concluded with Noah doing “according to all that God commanded him” (6:22). Here was a man of faith; a man who had not experienced a rainfall (for the waters were still in the firmament encircling the earth, 1:7), now building a massive ship, and preaching an imminent judgment (2 Peter 2:5).

The day came when the preacher’s sermons fell silent, and the work on the Ark was complete; “And the Lordsaid unto Noah, Come thou and all thy house into the ark; for thee have I seen righteous before me in this generation” (7:1).

In addition to the male and female of each “kind” and “every sort” being saved from the flood waters (6:19-20), we read that Noah was commanded to lead into the Ark seven “of every clean beast” (7:2-3), which we know he will later sacrifice in an act of worship and thanksgiving when the flood waters recede (8:20). Noah was 600 years old “when the flood of waters” began, and he “did according unto all that the LORD commanded him” (7:5-6, 16). With Noah, his family, and all the animals safe in the Ark, “the LORD shut [Noah] in” (7:16), and the waters that had been preserved in the earth since creation were “broken up, and the windows of heaven were opened. And the rain was upon the earth forty days and forty nights” (7:11-12). 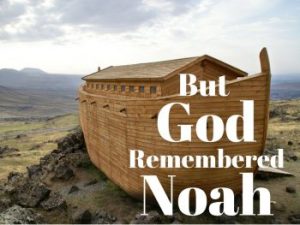 After a year of devastating storms and floodwaters, and after a year of confinement in the Ark, the Scriptures simply state, “God remembered Noah” (8:1).

In the midst of His wrath, and the greatest cataclysmic event to ever come upon the earth, God remembered one man and his family. The world Noah had known was destroyed, and every man, woman, boy, and girl were perished in the waters. Three hundred and seventy days after the rains began, Noah was commanded, “16 Go forth of the ark, thou, and thy wife, and thy sons, and thy sons’ wives with thee” (8:16).

Closing thoughts: Noah’s first act after disembarking from the Ark was to build an altar and offer sacrifices to God (8:20-21a). The LORD’s first act was to accept Noah’s sacrifice, and make a covenant with the man and his family (8:21b-22). Noah’s sacrifice acknowledged his sin, and need of a substitute, while God’s covenant served as His promise to extend His mercy, and promise to never again destroy the earth with floodwaters (8:21-22).

With the Ark resting on the slope of Mount Aarat as our backdrop, I close inviting you to picture in your thoughts, Noah and his family, prostrate on their faces before an altar. As the smoke of their offerings ascend to heaven, Noah looks across a valley and sees a beautiful rainbow (9:12-17), its arch appearing to reach toward the very throne of God.

By faith, Noah had entered through the door of the Ark, and God had shut the door, saving Noah and his family. So it is by faith that sinners enter another door, and are saved from the penalty of sins and eternal hell. That door is Jesus Christ who promised, “I am the door: by me if any man enter in, he shall be saved” (John 10:7, 11).

Is He your Savior?