Bildad had concluded his final address to Job, reminding him that, in the sight of Almighty God, a man can never be justified (25:4), for he is nothing more than a maggot (25:6). Job’s response to Bildad’s assertions comprised his longest speech, beginning with Job 26:1, and concluding with Job 31:40. We continue our examination of Job’s response, considering two chapters, Job 27-28.

Job continued his speech, but this time directed his appeal to God and complained that he felt he had been dealt with harshly (27:1-2). He acknowledged God as his Creator, and realized that he was like Adam, a man in whom “the Spirit of God is” (27:3; Genesis 2:7).

Job’s friends had challenged him to confess his sins, but he asserted his innocence and declared, “4My lips shall not speak wickedness, Nor my tongue utter deceit [lies]. 5God forbid that I should justify you [affirm or agree with their false accusations]: Till I die I will not remove mine integrity from me” (27:4-5). 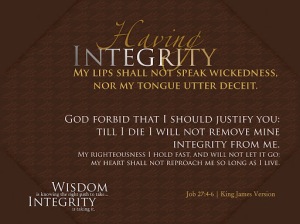 Job would not compromise his integrity, to appease his lying friends. His character and testimony were more important to him than pacifying men who assailed him. He was determined to be an honest man, one who would not bear the sorrow of a guilty conscience (27:6).

Job confessed that the wicked are not always punished according to their sins, but the judgment of God is inevitable (27:11-23). For instance, the children of the wicked often suffer for the transgressions of their fathers. They are destined “for the sword” (they often die early, tragic deaths), and they are never “satisfied with bread” (never happy or content, 27:14). When the wicked die, they have so embittered their wives that, their “widows shall not weep” for them (27:15). The households of the wicked are unstable, for “he buildeth his house as a moth” (27:18).

Job 28 – Searching for Wisdom Compared to A Miner’s Labor

Job described the lengths that men go to in seeking wisdom, and he drew an analogy with men who work in mines digging for gold and silver (28:1), and refining stones for iron, brass, and copper (28:2).

The intense labor of the miner is described (28:3-11). He digs a shaft into the earth, and brings light in search of ore (“stones of darkness,” 28:3). As the ground and rocks of the earth are mined, they reveal “sapphires…dust of gold” (28:6). The miner lays his hand to the rocks, and overturns mountains in seeking rich ore (28:9). He cuts channels in the rock (“rivers among the rocks”), and prevents waters from flowing into the mine (28:10-11).

The search for wisdom is as intense as the miner’s search for precious metals and stones.

Wisdom, unlike “book learning,” is not something a man can acquire in a classroom, or by hiring others to labor for him. True wisdom, the wisdom that only God can impart to a man, is priceless (28:13a). One cannot mine wisdom out of the earth, or find it by exploring the depths of the sea (28:14). Wisdom cannot be purchased with gold or silver (28:15), and the purest gold is not to be compared to it (28:16-19).

“23God understandeth the way thereof, And He knoweth the place thereof” (28:23). Man can only know wisdom by God’s revelation. God sees and knows all things, “24For he looketh to the ends of the earth, And seeth under the whole heaven” (28:24). God is Creator, and He knows the weight of the winds and the water, and regulates the rain and the “way for the lightning” (28:25-26).

The acquisition of wisdom begins with the fear and reverence of God (a fear of God and wisdom are inseparable).