Genesis 37 concluded with Joseph’s brothers returning to Canaan with his bloodied tunic. Deceiving their father, and breaking his heart, they led him to believe Joseph was dead (37:29-35). Meanwhile, Joseph had been transported to Egypt, and there he was sold to an Egyptian named “Potiphar, an officer of Pharaoh’s, and captain of the guard” (37:36).

Genesis 38 – Judah, an Inauspicious Beginning of a Royal Lineage

The study of Joseph’s life was intersected briefly as the focus shifted to Judah (29:35), the fourth born son of Jacob (38:1). Although his lineage will be a royal one of whom King David, and Jesus Christ will be born (Mary and Joseph were both descendants of Judah), our introduction to Judah in Genesis 38 is an ignoble one.

Failing to evidence the character of a righteous man, we find Judah had a close friendship with “a certain Adullamite, whose name was Hirah” (38:1). Adullam was located in the pastoral lands of southern Judah, and it was probably while shepherding his father’s flocks that he became an acquaintance of Hirah. Judah’s questionable friendship led to an interest in a woman named Shuah, a Canaanite, and not one God or his father would have approved (38:2).

Judah took Shuah as his wife, and she conceived three sons (38:3). The firstborn was named Er (38:3), the second son was Onan, (38:4), and the third born son was Shelah (38:5). Er, Judah’s firstborn, took a wife named Tamar; however, before she conceived, the LORD slew him because he was “wicked in the sight of the LORD” (38:6-7). Following the custom of a man marrying his brother’s widow to perpetuate his lineage, Onan, Judah’s second son, rejected Tamar and the LORD “slew him also” (38:10). Twice a widow, Judah then sent Tamar to her father’s home, vowing she would be given opportunity to marry his youngest son, a promise he had no intent to keep (38:11).

Learning Judah was a widower (38:12), and realizing she had been deceived by him, Tamar set on a course to ensnare her father-in-law. Concealing her identity, and posing as a prostitute (38:14), she tempted Judah. He foolishly turned aside, and negotiated a price for her favors (38:15-17). Tamar, however, was a shrewd woman, and until Judah could fulfill her fee, she demanded a pledge, a deposit, that would serve as her security. Judah then presented her with personal items that would be easily identifiable: a “signet” that would be used to seal documents, his bracelets, and his staff (38:18).

Although a simple, four-worded phrase, it serves as a reminder that actions have consequences. Three months after she conceived, Judah learned that Tamar was with child, and he was told that “she [was] with child by whoredom” (38:24).

Hypocritically, Judah condemned Tamar to “be burnt” (38:24b); however, she produced the personal items, he had left with her: “the signet, and bracelets, and staff” (38:25). Acknowledging they were his, he confessed, “She hath been more righteous than I; because that I gave her not to Shelah my son. And he knew her again no more” (38:26). 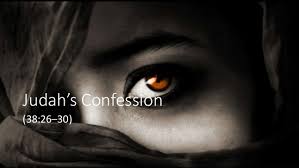 Tamar conceived twin sons by Judah, and Pharez, the oldest son, and Zarah, became his heirs. He evidenced sincere repentance when he confessed his sin, which was seen in his withdrawal from her (38:26b).

The story of Judah and Tamar is a testimony of God’s grace and forgiveness, for they and their sons are named in the lineage of kings and Christ (Matthew 1:3). Pharez, the firstborn son is in the direct line of the Messiah.

Genesis 39 – The Providence of God: The LORD is with us!

Following the life of Joseph is akin to a spiritual rollercoaster with wonderful highs, followed by events that would threaten to plunge most men into a slough of despair.

Rather than give in to despondency and bitterness, Joseph’s faith in the LORD remained unshaken, and he rose from slave to steward over Potiphar’s household (37:36). Even when his master’s wife endeavored to entrap him in her lusts (39:7), Joseph refused her advances, and reasoned “how then can I do this great wickedness, and sin against God?” (39:9)

Though a young man, Joseph did not rationalize sin, but resisted it (39:9-11). When Potiphar’s wife thrust herself upon him, he ran from her embrace, leaving behind the garment she had seized from him (39:12-13). When she falsely accused him of indiscretion, Joseph held his peace, and was sentenced to prison (39:19-23). When he was a prisoner, and wrongfully accused, Joseph prospered, “because the Lord was with him, and that which he did, the Lord made it to prosper” (39:23).

I look forward to sharing the rest of the story, and the testimony of God’s providences in Joseph’s life, and how God made him prosper even in the darkest times!