With the defeat of the Amalekites (17:13-16), the LORD magnified the standing of Moses and Joshua, and news reached the nations of “all that God had done for Moses, and for Israel his people, and [how] the Lord had brought Israel out of Egypt” (18:1). Soon after, Jethro, “the priest of Midian,” and the father-in-law of Moses, journeyed to Israel’s encampment (18:1), reuniting him with his wife and sons (18:1-5).

Although he had proved himself to be a great leader, when Moses learned his father-in-law had come, he honored him and “went out to meet [him]… and did obeisance [bowed before him], and kissed him” (18:7a).

What a great reunion, as Jethro and Moses “asked each other of their welfare; and they came into the tent” of Moses (18:7b). We do not know the number of hours that passed as Moses rehearsed “all that the Lord had done unto Pharaoh and to the Egyptians for Israel’s sake” (18:8a). Remembering the timidity of Moses when the LORD had first called to him from the midst of the burning bush, I am sure Jethro took pride in the man who was his son by marriage.

Moses shared not only the victories, but the trials “that had come upon them by the way, and how the Lorddelivered them” (18:8) from thirst, and hunger, and given Israel success over the Amalekites (17:8-16). 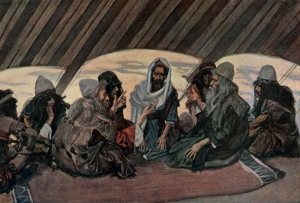 Jethro rejoiced in the LORD’S goodness, and how He had delivered the nation out of slavery (18:9-10). He testified, “11Now I know that the Lord is greater than all gods: for in the thing wherein they dealt proudly he was above them” (18:11). Though he was a Midianite, and not numbered among the children of Israel, he was a man of faith in the God of Israel, and “took a burnt offering and sacrifices for God” (18:12), and invited Moses, his brother Aaron, “and all the elders of Israel, to eat bread…before God” (18:12).

The celebration was short lived, for the next day Moses did what he did every day, with the exception of the Sabbath: He “sat to judge the people” (18:13). Jethro looked on, as the people gathered “from the morning unto the evening” (18:13), waiting for Moses to weigh their concerns, and pass judgment. He enquired of Moses, “What is this thing that thou doest to the people? why sittest thou thyself alone, and all the people stand by thee from morning unto even?” (18:14)

Jethro suggested there was a better way to judge the people, and that was to “teach [the people] ordinances and laws, and [show] them the way wherein they must walk, and the work that they must do” (18:20). He suggested that Moses should choose “able men, such as fear God, men of truth, hating covetousness; and place such over them…22And let them judge the people at all seasons: and it shall be, that every great matter they shall bring unto thee, but every small matter they shall judge: so shall it be easier for thyself, and they shall bear the burden with thee” (18:21-22).

I close inviting you to notice how Moses heeded his father-in-law’s counsel (18:21-22), and “chose able [capable] men out of all Israel, and made them heads over the people…and they judged the people at all seasons [as the need arose]: the hard causes they brought unto Moses, but every small matter they judged themselves (18:25-26). They were men who feared God; pious, godly men (18:21). “Men of truth,” who were worthy of trust, and did “hate covetousness;” they were men of integrity and were above reproach (18:21). 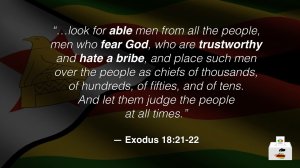 What about you? Would you have the spiritual qualities God seeks in a man or woman who serves Him?