Numbers 6 – The Nazarite Vow, and the Aaronic Priestly Blessing

The law of the Nazarite, a voluntary vow, was instituted in Numbers 6. Considered a vow of consecration, a man or woman could “vow a vow of a Nazarite” (6:2), and it was a vow of abstinence, and separation unto the LORD.

A Nazarite vow consisted of three personal disavowals. Abstaining from wine and strong drink (6:3-4) was the first. The second, as an outward sign of devotion, a Nazarite was not to cut his or her hair for the time of the vow (6:5). Thirdly, Nazarites were forbidden to touch a dead body, even that of a loved one (6:6-7). Should one fail to keep the Nazarite vow, and become unclean, there were prescribed steps for remediation and purification, including sacrifices that were to be offered to the LORD (6:9-12).

When the days of the Nazarite were fulfilled, he or she was to bring offerings to the Tabernacle before the LORD as a release from their vows (6:13). A burnt offering, sin offering, peace offering, meat or meal offering, and a drink offering were required (6:13-17). After offering sacrifices to be released from the vow, the head was to be shaven (6:19), a wave offering of thanksgiving given (6:20), and the Nazarite was then allowed to drink wine (6:20). (The matter of drinking wine is one I will take up in the future; however, be assured the wine mentioned here was not the distilled, strong drink of our day.)

Numbers 7 – The Dedication of the Tabernacle, the Altar, the Vessels, and Instruments Used in the Offerings

After much planning, and following the detail guidelines set forth by the LORD in preparing a sanctuary, the Tabernacle was set up, anointed, and sanctified (7:1). The altar, vessels, and instruments that would be used for offerings were consecrated to the LORD.

The princes of the Twelve Tribes, and the heads of households, “brought their offering before the Lord, six covered wagons, and twelve oxen; a wagon for two of the princes, and for each one an ox: and they brought them before the tabernacle” (7:3).

The Merarites were assigned four wagons, and eight oxen, “according unto their service” (7:8). They required more wagons and oxen because they were charged with the greater weight (i.e. the boards, and pillars that made up the frame of the Tabernacle, 4:31-32). 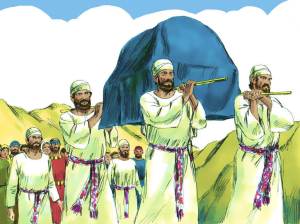 The Kohathites were not given wagons or oxen “because the service of the sanctuary belonging unto them was that they should bear upon their shoulders” (7:9). The Kohathites were responsible for transporting the Ark, the table, the lampstand, and the altar (4:5-20). Those objects, central to Israel’s worship and sacrifices, were to be carried upon the shoulders of the Kohathites with staves or rods.

Why the repetition? I believe the twelve days of dedication, and the naming of the sacrifices that were brought, added to the solemnity of the dedication, and gave each tribe its own sense of standing with the LORD.

Numbers 7 concludes with the sum of the offerings being accounted (7:84-88), and Moses, though not a priest, given a special audience with the LORD in His sanctuary (7:89).

I conclude today’s devotion with the beautiful prayer, the priestly blessing, that was spoken by Aaron and his priestly sons to bless the children of Israel (6:24-26).

Numbers 6:24-26 – “The LORD bless thee, and keep [watch, guard] thee: 25  The LORD make his face shine [illuminate] upon thee, and be gracious [grant favor] unto thee: 26  The LORD lift up his countenance upon thee, and give thee peace [shalom].”