Joshua 2 – Two Spies, and a Harlot

With the affirmation and enlistment of the tribes that would settle on the land’s east of the Jordan (Reuben, Gad, and the half tribe of Manasseh, 1:12-18), Joshua sent two spies to survey the city of Jericho (2:1).

The city of Jericho, like Egypt, serves as a picture or type of the world in the Scriptures. It was a place of wealth, commerce, idolatry, and all manner of wickedness, including harlotry. The city was also an obstacle to Israel invading the land, and Joshua knew it must be destroyed.

Arriving in Jericho, the spies providentially entered an inn, located on the walls of the city, and one identified as “an harlot’s house, named Rahab” (2:1b). Why the house of a harlot? There are many reasons I might suggest, but the one most important is, the LORD knew Rahab’s heart was moved to faith by all she had heard about Israel, and their God.

Rahab hid the spies, at the risk of her life (2:2-6), and lied when the king’s men came seeking them. Some might argue the moral grounds for her lies, but we must remember she was ignorant of God’s Laws, and Commandments, and her conscience was probably unstirred by her sin. Rahab professed her faith in the LORD, when she appealed to the spies that she, and her family be spared the destruction of Jericho she believed was certain.

Consider the faith of Rahab: “9And she said unto the men, I know that the Lord hath given you the land…10For we have heard how the Lord dried up the water of the Red sea for you, when ye came out of Egypt; and what ye did unto the two kings of the Amorites, that were on the other side Jordan, Sihon and Og, whom ye utterly destroyed (Numbers 21:21-24, 33-35). 11And as soon as we had heard these things, our hearts did melt…for the Lord your God, he is God in heaven above, and in earth beneath” (2:9-12).

The spies gave Rahab a sign, a token of her faith, and instructed her, “bind this line of scarlet thread in the window which thou didst let us down by: and thou shalt bring thy father, and thy mother, and thy brethren, and all thy father’s household, home unto thee” (2:18). The spies returned to Israel’s’ encampment, and assured Joshua, “Truly the Lord hath delivered into our hands all the land; for even all the inhabitants of the country do faint because of us” (2:24).

Joshua 3 – Stepping Out by Faith, and Into the Jordan

Wasting no time to muster the people to trust the LORD (3:1), Joshua commanded the nation to relocate to the shores of the Jordan, whose waters they must cross to enter the Promised Land (3:2). For three days, an estimated two million people stood looking at the flood waters, and questioning, “What now?” 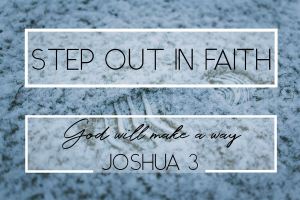 Joshua then commanded the priest to carry the “Ark of the Covenant of the LORD” before the people, and warned them to stand at a distance from that which represented the LORD’S throne, and His presence in the midst of Israel (3:3-4). One senses the joy, and anticipation of Joshua, as he tells the people, “Sanctify yourselves: for to morrow the Lord will do wonders among you” (3:5).

For forty years, the people had heard how the LORD had opened the Red Sea for Israel to pass through on dry ground. The LORD now promised He would magnify Joshua’s name. “The Lord said unto Joshua, This day will I begin to magnify thee in the sight of all Israel, that they may know that, as I was with Moses, so I will be with thee. 8And thou shalt command the priests that bear the ark of the covenant, saying, When ye are come to the brink of the water of Jordan, ye shall stand still in Jordan” (3:7-8).

The dividing of the waters of the Jordan, assured the people “that the living God is among you” (3:10a), and He would drive the heathen nations from the land (3:10). Bearing the “Ark of the Covenant of the LORD,” the priests stepped into the flood waters, and as they did, the waters divided “and the people passed over right against Jericho. 17And the priests that bare the ark of the covenant of the Lord stood firm on dry ground in the midst of Jordan, and all the Israelites passed over on dry ground, until all the people were passed clean over Jordan” (3:16-17).

The “Ark of the Covenant” was a symbol of God’s presence, and power. It served as a testimony that the LORD would go before His people, and Israel passed through the dry bed of the Jordan, confident the LORD who had parted the waters was with them.

Faith, is the Victory!