Joshua 12 – For the Record: A List of Kings and City States Conquered by Israel

Joshua 12 is the record of the kings Israel had conquered, and the lands God had promised His people as their inheritance in Canaan.

Joshua 12:1 gives us a description of the land that Moses had promised to the tribes of Reuben, Gad, and the half-tribe of Manasseh. Those two and one-half tribes were to occupy lands that had been ruled by Sihon, king of the Amorites (12:2-3), and Og, the king of Bashan (12:4-5). Reuben, Gad, and the half tribe of Manasseh had requested, and Moses had agreed to give them the lands east of the Jordan (12:6).

The boundaries of the Promised Land on the west side of the Jordan are defined, and described (12:7-8). These lands had been inhabited by “the Hittites, the Amorites, and the Canaanites, the Perizzites, the Hivites, and the Jebusites” (12:8), and all whom were descendants of Canaan, the cursed son of Ham, the son of Noah (Genesis 10:15-18; 15:21; Deuteronomy 7:11). Thirty-one kings were defeated, and are listed in the order they had been conquered (12:9-24).

The division of the lands on the west side of the Jordan River is recorded, beginning with Joshua 13, and extending to Joshua 24).

Joshua 13 begins with a striking dialog between the LORD and Joshua. Unlike Moses, who had lived one hundred and twenty years, and had not grown weak or frail in his old age (Deuteronomy 34:7), Joshua’s physical condition was described as “old and stricken in years” (13:1a). The LORD came to Joshua and stated the obvious: “Thou art old and stricken in years, and there remaineth yet very much land to be possessed” (13:1).

Joshua’s age is not disclosed, but he would not live to see Israel fully conquer, and possess the land (13:1b-2). There was still much land to be settled, and those lands are identified, including the nations that occupied them (13:2-5). Because Joshua was old, it was necessary that he divide the lands west of Jordan among the nine and one-half tribes, and command them to drive the inhabitants out of the lands God had given them (13:7-13). 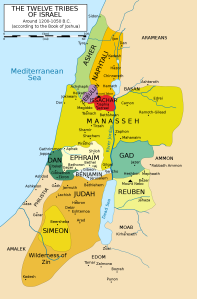 Two times we are reminded that the tribe of Levi would not receive land as their inheritance. The Levites had been chosen, and sanctified by the LORD to serve Him, and their inheritance would be a portion of the offerings brought by the people to the Tabernacle (13:14, 33; Numbers 18:20; Deuteronomy 19:9; 18;2).

Our study of the divisions of the land will continue tomorrow with the remarkable testimony of Caleb in Joshua 14.